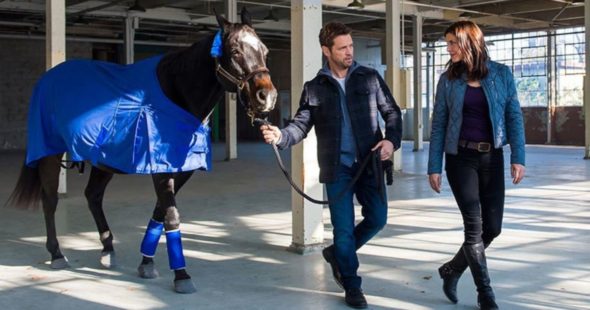 Do Angie Everett and Matt Shade click as partners during the first season of the Private Eyes TV show on ION? As we all know, the Nielsen ratings typically play a big role in determining whether a TV show like Private Eyes is cancelled or renewed for season two on ION (it’s already been renewed in Canada). Unfortunately, most of us do not live in Nielsen households. Because many viewers feel frustration when their viewing habits and opinions aren’t considered, we’d like to offer you the chance to rate all of the Private Eyes season one episodes here.

An ION comedy-drama based on the G.B. Joyce novel, The Code, Private Eyes stars Jason Priestly, Cindy Sampson, Ennis Esmer, Barry Flatman, Jordyn Negri, Clé and Bennett. The series centers on former professional hockey player Matt Shade (Priestly), who first teams up with formidable P.I. Angie Everett (Sampson), to solve the mystery of why a top hockey prospect dropped on the ice. Although they’re both fierce competitors who have different outlooks on life, Angie and Matt soon find that together, they form an unbeatable partnership.

What do you think? Which season one episodes of the Private Eyes TV series do you rate as wonderful, terrible, or somewhere between? Should ION cancel or renew Private Eyes for a second season? Don’t forget to vote, and share your thoughts, below.

I really enjoyed this show, I thought Jason’s character was really enjoyable. All the cast were very good. Seems like a lot of shows I enjoy get cancelled. What does that say about me.

Please, please, please bring back Private Eyes To ION TV for more seasons!! Love this show!! In fact, you can add Whiskey Cavalier to your channel listing as ABC made a very stupid move & canceled it after one season. It was equally good! Both are wholesome entertainment.

Please bring season 3 of Private Eyes to ion!, I enjoyed watching the first 2 seasons and really want to see how the season 2 cliff hanger gets resolved!!

Please do everyone a favor and cancel this horrible show. The acting is, dare I say it ? Even worst than sitting threw an episode of 90210. I’m pretty sure 2 programmed computers would do a better job acting then those 2 bozzoes. Please replace their slot with SVU reruns at least then the need to vomit is replaced with joy.

The previews feature some of the worst writing and hammiest acting on TV!

I so agree ! HORRID AND HAMMY! lol Yuck! I can’t even stand the commercials for the show!

I’ve read that it’s already been renewed for season 3 but we still haven’t seen season two yet. ION keeps running season one over and over again. Please give us season two.

I really enjoy watching Private Eyes. It is a great show and I enjoy the different shows that you have come up with. I look forward to watching Season Two. It is really entertaining.

I really enjoyed season one and I would love to see more. Jason Priestly has been an unexpected delight to watch. ION should do a better job of promoting this show. I only discovered it by accident.

Yes, my husband and I would like to see season 2 and 3 when available

I would like to see season 2 of private eyes

Please bring it back I really like to see more of the show. Loved it.

Please bring Private Eyes back for Season 2 and many more. I love this show!! I have always been a Jason Priestley fan since Beverly Hills, 90210. I enjoy these types of shows…..good clean family TV shows.

Ion you have provided a show with comedy and engaging drama and the plots and characters are genuine and entertaining. Please renew for the second season.

I love this show and would like to see more please. The chemistry between Angie and Matt is adorable. I loved “Maz” when he was on “The Listener”! Bring it back for another season and another and another…❤️❤️❤️

I LOVE this show, too. BUT I think ION is doing a lousy job of scheduling it and promoting it.

I wholeheartedly agree!! They put it on in a lousy timeslot, they are just looking for it to fail.

What is going with u people? I already watched season 2 and I am waiting for ,season3

This is the first time that it’s been shown in the US. I’m guessing you’re watching the Canadian broadcasts. BTW, only half of season two has aired. The second half will air in Canada this summer.