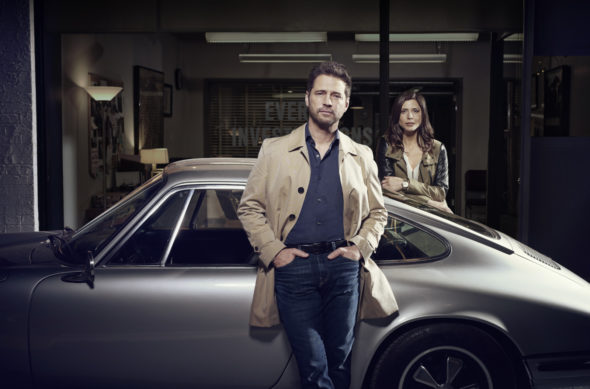 TV show description:
From creators Tim Kilby and Shelley Eriksen, the Private Eyes TV show is a comedy-drama based on the G.B. Joyce novel, The Code. The series, which originated on Global television in Canada, centers on former hockey pro Matt Shade (Priestly) and private investigator Angie Everett (Sampson).

When a professional hockey prospect goes down on the ice, Matt Shade promises his family he will find out what happened. Because of the fishy circumstances surrounding the incident, he ends up teaming with Everett. Together, they set out to unravel the mystery and save a life.

As a P.I. and the sole proprietor of Everett Investigations, Angie is a gutsy force with which to be reckoned. Although she considers Shade naïve, she appreciates his spunk, as well as the passion he brings to the job.

Working with Angie, Shade realizes he needs to figure out who he truly is and wants to be. For him, the job is part of his road to redemption — even though his new partner is convinced that people do not change.

As natural competitors, Angie and Shade may seem like an unlikely duo. When they work together though, they’re downright unstoppable.

Series Finale:
Episode #60
This episode has not aired yet.
First aired: TBD

What do you think? Do you like the Private Eyes TV series? Should this TV show have been renewed for a sixth season?

Please bring the show back on, it is a very good program.

Please, go on with this show, it’s our favorite show!

Please bring back Private Eyes it was a great show and much better than the garbage out now.

I love this show it is the best actor are great

I love this show, is one of my favorites, please go on….

More Private Eyes, please! For some reason we don’t get all the episodes here in the US as syndicated on ION (haven’t even aired the entirety of season 3 as far as my TIVO can tell) but I still really love this show. Love the leads and supporting cast, the fun local adventures they get into, the Canadian-pop score, and seeing some of Toronto in every episode. I honestly can’t tell from anything I’ve read whether it’s been cancelled or renewed, or just kind of on hold or ended due to covid? I hope it’s not done, it’s one of… Read more »

So desperately hope this fun and entertaining show continues.

I am not seeing any of this season Global said it was going back to Thursday night showings. I have checked again to day as I do every day, and it is not on. What gives? Where and when can I see this show. One of my favorites.

Love this show and want a Season 6. I want to see how it works out with Angie and Shade. There is so much more story to tell especially now that Shade’s dad has been elected, Jules and Liam getting more serious about each other.
On the other hand if there is no Season 6 then “Private Eyes” ends on a high note with the audience wanting more.

Season 6 please, i really want to see where Angie and Shade take it to, love everyone on the show. Please, Please don’t cancel.