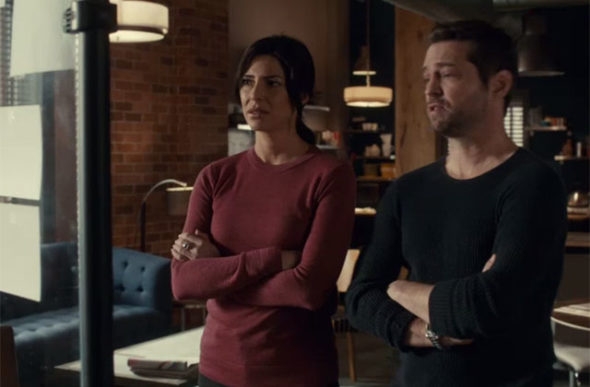 Private Eyes might be watching you, but are there enough eyeballs trained on them? Is the Private Eyes TV show cancelled or renewed for a second season on ION? The television vulture is watching all the latest cancellation and renewal news, so this page is the place to track the status of Private Eyes, season two. Bookmark it, or subscribe for the latest updates. Remember, the television vulture is watching your shows. Are you?

An ION comedy-drama based on the G.B Joyce novel, The Code, Private Eyes stars Jason Priestly, Cindy Sampson, Ennis Esmer, Barry Flatman, Jordyn Negri, Clé and Bennett. The series centers on former professional hockey player Matt Shade (Priestly), who first teams up with formidable P.I. Angie Everett (Sampson), to solve the mystery of why a top hockey prospect dropped on the ice. Although they’re both fierce competitors who have different outlooks on life, Angie and Matt soon find that together, they form an unbeatable partnership.

The first season of Private Eyes averaged a 0.24 rating in the 18-49 demographic and 1.17 million viewers. Find out how Private Eyes stacks up against other ION TV shows.

In Canada, the first 10-episode installment debuted on Global in 2016. The Canadian network subsequently renewed it for a second season of 18 episodes and a third of 13 episodes. Unless its ratings in the States are really low and the price tag is sky high, I suspect it will score a second season on ION. For now, I’ll keep a hungry eye on the Nielsens and update this page with breaking developments. Subscribe for free Private Eyes cancellation or renewal alerts.

What do you think? Are you glad that the Private Eyes TV show has been renewed for season two on ION? How would you feel if ION cancelled this TV series, instead?

WTF!!!!! Where is Private Eyes????? It’s not on my Ion channel. I understand that there are only a few seasons you can keep running, but I’m a faithful watcher and watch it over and over AND over again. Every time I see something new. I never had the chance to watch it on regular airtime, so I watch the repeats. I get much joy when my Tues. night comes around. I watch it on my east and west coast. WHY OH WHY did you remove it??? Is it coming back on?

I just recently started watching though I have recorded every episode from the beginning back in Feb. I am of an age where the natural appeal of the show for me is Jason Priestly (Huge 90210 fan). It has great story lines and the lead characters are fantastic together. It is also wonderful they introduced a blind character into mainstream television. I hope the show stays around.

It should be cancelled! I love cop shows and private eye shows, I even grew up watching them with my mom, now this show I have a really hard time getting into it. I tried watching it a couple of times and each time I’ve ended up turning it off and my sister is having the same problem as well.

Private Eyes could teach other shows how to keep the action/ plot moving. It is well written, well edited, well cast, well acted. The chemistry of the cast is wonderful. Hallmark Movies and Mysteries could learn a lot from this show.

Thoroughly enjoy this program. I find it very entertaining. I especially like the interaction between the main characters. It’s reminiscent of several of the good comedy/drama shows of previous years such as:Remington Steele, Simon and Simon, Rockford Files,etc. I’ll sincerely hope it will be renewed.

Very good show. The chemistry between he two main actors is impeccable!! Nothing like it on TV today. Looking forward to watching season 2.

I am really enjoying this show a lot. I hadn’t seen Jason Priestley in much of anything since his 90210 days and I have always liked him. He is great in this role and pretty funny at times too. I love his role as father as well. He and his female partner have good on screen chemistry and make a great team. Keep it. I love it!

This a great show! It makes me want to become a private detective.

We love this show! No need to compare it to Moonlighting, Remington Steele Hart to Hart or any other shows of male & female detective teams. Enjoy it for what it is. Light hearted and entertaining. We really like that it’s filmed in Toronto. The family line with the blind daughter and the dad brings a warm tie in to the story line. Jason Priestly does a great job as the divorced dad/PI partner.