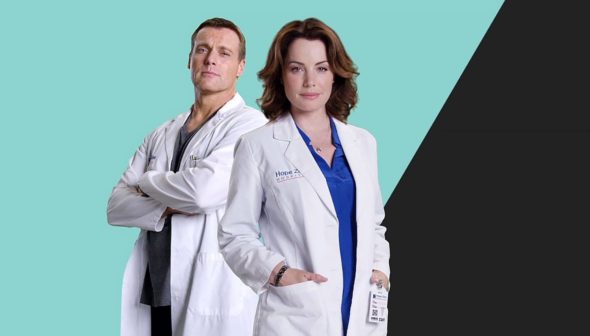 WEST PALM BEACH, March 6, 2017 – Season five of ION Television’s original series, “Saving Hope,” debuts with an all-new episode on Tuesday, March 14, at 12 AM ET/11 PM CT. The medical drama from ICF Films and Entertainment One (eOne) returns with an 18-episode season. Viewers can also watch an encore of each new episode on Saturday nights at 12 AM ET/11 PM CT, as well as the following Tuesday at 11 PM ET/10 PM CT.

“Saving Hope” is produced by ICF Films in association with eOne and CTV, the originating Canadian broadcaster, with the participation of the Canada Media Fund and the Canadian Film or Video Production Tax Credit. Season 5 is executive produced by Ilana Frank, John Morayniss, and Linda Pope, and co-executive produced by Noelle Carbone, Patrick Tarr, Jocelyn Hamilton, and Sonia Hosko. Adam Pettle is Executive Producer and Showrunner. All distribution rights are handled by eOne.

What do you think? Are you a fan of the Saving Hope TV show? Do you plan to watch the fifth and final season of this TV series on ION or CTV? Let us know, below.

So disappointed that the series ended. Everytime I find a decent series its taken off.

I was very disappointed to learn that Saving Hope would not be returning this year.. Truly enjoyed watching all the 85 episodes. Not too many good family, interesting shows. What a shame!!

I really enjoyed Saving Hope one of the best shows on tv. I wish someone would listen to the public and keep the decent clean shows on tv instead of bedroom sex and foul language shows. No wonder foul words are used so often by people when that’s on tv all the time. Wish the networks would rethink taking this show off the air.

I am so upset my saving Hope is leaving, Why?. I don’t know of another show I would rather watch . WHY do all the best shows get taken off . Please don’t take it off.

I’m very upset that Saving Hope is not coming back. Why are the good shows always cancelled?

Very, very unhappy with the ending. I didn’t know how much I loved this series until watching and being depressed about the ending. Why so many times did they both have tragedies and why could you not give us at least a season with them being married and being happy and enjoying their kids. Why couldn’t you mess with some other characters for once.
It was a great show with lots of great actors and characters. They all did a wonderful job of drawing me in to their world.

Very unhappy with the ending of the series and with how it was ended. I th I k .o st fans will agree. We waited along to see them finally marry that far s deserved to see them be happy with the two children. The network has screwed their viewers by doing such unhappy sudden ending. Very very disappointed. Makes me not want to watch other series produced by the same network. Truthfully, I will boycott any programs I can. I just think the fans of the show deserved a happy ending. I agree with t he organ donation but… Read more »

Karen
I really love Saving Hope . I wish they hadn’t ended it like they did. They could have had at least one more season with Alex and Charlie seeing their new baby and and being happy for the whole season before killing Charlie off. I’m going to miss all the cast. Why didn’t they do another seasons? It was a great show.