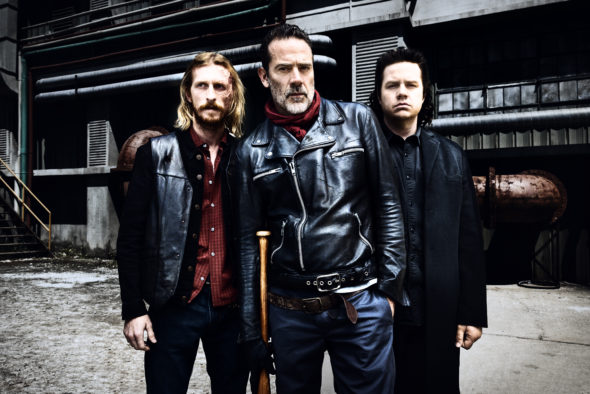 Have Rick and his crew survived the undead horde? Is The Walking Dead TV show cancelled or renewed for a ninth season on AMC? The television vulture is watching all the latest cancellation and renewal news, so this page is the place to track the status of The Walking Dead, season nine. Bookmark it, or subscribe for the latest updates. Remember, the television vulture is watching your shows. Are you?

The eighth season of The Walking Dead averaged a 3.39 rating in the 18-49 demographic and 7.82 million viewers. Compared to season seven, that’s down by 37% and down by 31%, respectively. Learn how The Walking Dead stacks up against other AMC TV shows.

Unless the unthinkable happens, since it has been AMC’s top-rated TV series, it is hard to imagine the network will cancel The Walking Dead. Still, all good things must come to an end, so I’ll keep an eye on the Nielsen ratings and update this page with breaking developments. Subscribe for free updates on The Walking Dead cancellation or renewal news.

What do you think? Are you glad that AMC has renewed The Walking Dead TV show for a ninth season? How would you feel if they had cancelled this TV series, instead?

Oh gosh…and here I thought it was finally over. There is no business keeping this show alive with most of the important cast gone. I won’t be watching.

Season 9 should end the walking dead, bring Morgan to fear, have the whisperers show up in fear as well and let it run out a few more seasons and then let it die. It’s had a great run and it still holds up today as far as entertainment goes.

Deeana
Reply to  Sheev Palpatine, Dark Lord of the Sith

Morgan is already going to Fear the Walking Dead but I don’t really like that show.

If they keep going like this, there won’t be any characters left on the show.

They should not renew for season 9 they already fucked up well by they i mean scott gimple one of the worst writers/ showrunner also destroyed the core meaning of the entire show without Carl the entire point of the war and any future is nothing. end it on this season i hope they do. you can’t replace a character like that that has so much important roles in the next arc either find a way to keep carl or end the season

Yes why not , as long as they get rid of Negan this season . I couldn’t bear to hear any more of his boring monologues .

Neither just finish it.