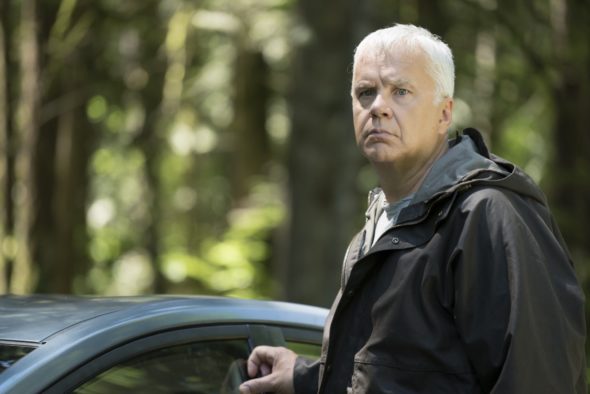 How are Greg and Audrey doing living in the present? Has the Here and Now TV show been cancelled or renewed for a second season on HBO? The television vulture is watching all the latest cancellation and renewal news, so this page is the place to track the status of Here and Now, season two. Bookmark it, or subscribe for the latest updates. Remember, the television vulture is watching your shows. Are you?

An HBO comedy-drama, Here and Now stars Tim Robbins, Holly Hunter, Jerrika Hinton, Daniel Zovatto, Raymond Lee, Sosie Bacon, Andy Bean, Joe Williamson, Peter Macdissi, Avynn Crowder-Jones, Stephanie Arcila, and Erin Carufel. The series centers on a progressive white couple, Greg (Robbins) and Audrey (Hunter), and their multi-ethnic brood, as well as a contemporary Muslim psychiatrist (Macdissi). While they don’t always make the best choices in this world gone mad, they’re all struggling to live authentically in the here and now, because that’s all there is.

The first season of Here and Now averaged a 0.11 rating in the 18-49 demographic and 378,000 viewers. Learn how Here and Now stacks up against the other HBO TV shows.

Will HBO cancel or renew Here and Now for season two? The ratings haven’t been good but HBO doesn’t really worry about those. They’re interested in attracting and keeping members by giving the perception that viewers can’t find their quality of programming anywhere else. I suspect the talent behind the show may be enough to get the show renewed. I’ll update this page with breaking developments. Subscribe for free Here and Now cancellation and renewal alerts.
4/25/18 update: HBO has cancelled Here and Now after one season. Details here.

What do you think? Were you hoping that the Here and Now TV show would be renewed for a second season? Are you sorry that HBO cancelled this TV series, instead?

I was really hoping
To see season 2 of Here and Now, loved the show and am very disappointed it’s not coming back:(

Loved this show. Bring it back. Loved cast and roles they played….all of them. Please reconsider this shoe.

Would love a second season! Didn’t know about the show, it was recommended to me. Watched it and LOVED it!!!
The cast is great and loved the story line.

We hope that the show will have a follow up. We love it here in the Netherlands. Great acting and an exiting storyline. We are curieus about how it ends. Maybe as a compromise only a second season? Please??!!

Yelena
Reply to  Mies and Pas

I just stated a petition for all of us to sign and share! Let’s bring this gem back. Thank you for your help! ❤️
https://www.change.org/p/hbo-bring-back-hbo-here-and-now-by-alan-ball?recruiter=136376485&utm_source=share_petition&utm_medium=copylink&utm_campaign=share_petition&utm_term=Search%3ESAP%3EUS%3ENonBrand-Tier%201%3ECreation%3EBMM

I, too, really got into this show. i don’t watch a lot of t.v., but that’s why I subscribe to HBO. I know the programs are outstanding

I found this the most provocative, thought-provoking treasure. Being a ‘60’s open-minded, we-can-change-the -world-in-harmony leftover, I identified so much with the parents’ disillusionment and the kids were awesome. The whole cast was awesome. Please find a way to bring it back! My favorite new show in years.

I hope HBO renew a second season, i loved that serie

I love this show. Please please do a series 2

Fabulous show. Would be a crime to cancel it – so little of quality on
TV – Alan Ball is a master!

This **** is getting cancelled. You bet your ass HBO cares when a prime-time drama pulls only 300k viewers, especially with all the competition these days.

I LOVE this show and hope there is a Season 2! For those who hated it…seems like you didn’t get the nuances of the multicultural family.