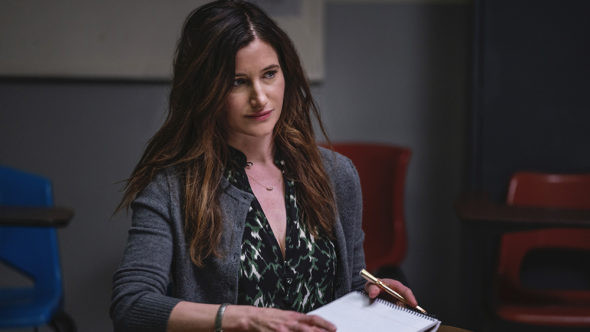 Will Eve and Brandon find their way? Has the Mrs. Fletcher TV show been cancelled or renewed for a second season on HBO? The television vulture is watching all the latest cancellation and renewal news, so this page is the place to track the status of Mrs. Fletcher, season two. Bookmark it, or subscribe for the latest updates. Remember, the television vulture is watching your shows. Are you?

Airing on the HBO television channel, Mrs. Fletcher stars Kathryn Hahn and Jackson White with Owen Teague, Katie Kershaw, Domenick Lombardozzi, Cameron Boyce, Jen Richards, and Casey Wilson. The show is a dual coming-of-age story that chronicles the personal and sexual journeys of an empty-nest mother and her college freshman son. Eve Fletcher (Hahn) is a single mother in her 40s who works as the executive director of a senior center. She drops off her only child at college and returns home to a very empty house. Meanwhile, Eve’s son Brendan (White), a popular (though sometimes clueless) jock, finds that college is a little more complicated than he expected. .

The first season of Mrs. Fletcher averaged a 0.08 rating in the 18-49 demographic and 260,000 viewers. Find out how Mrs. Fletcher stacks up against other HBO TV shows.

Will HBO cancel or renew Mrs. Fletcher for season two? The channel has described this show as a limited series but it feels like it’s truly a mini-series, with a natural conclusion. In fact, the last episode was dubbed the “series finale.” Still, if the public or HBO wants more, there’s a chance that a second season could be made (ala Big Little Lies). I’ll update this page with breaking developments if that happens. Subscribe for free alerts on Mrs. Fletcher cancellation or renewal news.

What do you think? Were you hoping that the Mrs. Fletcher TV show would be renewed for a second season? Would you have watched season two?

Need season 2 in my life

HBO there has to be a season 2. There is so much material to work with & the acting is super good. It’s like a cliffhanger where the viewers are wanting more.

Definitely would have watched

Please HBO, don’t let us down! I just paid for HBO for this show alone. Please p/u Season 2! Amazing show!

Loved the show. Would love to see a season two.

Great series..superbly acted… crazy not to carry on

I loved it!!! The characters and the storylines were fantastic. Please make another season!!!

Loved this series. I laughed so hard at the final scene when the son comes home and the facial expressions as the guests leave. Hilarious. BTW I’m 72. Can’t wait for Season 2.