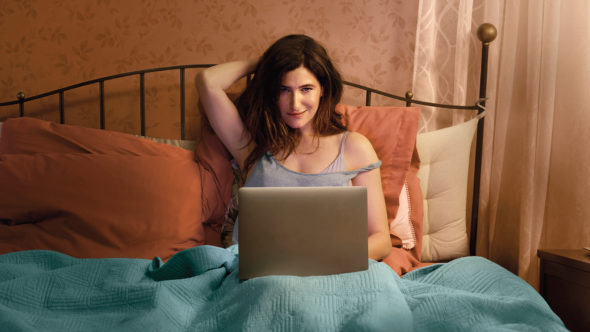 TV show description:
A comedic series that’s based on the novel by Tom Perrotta, Mrs. Fletcher is a dual coming-of-age story that chronicles the personal and sexual journeys of an empty-nest mother and her college freshman son.

As the series begins, Eve Fletcher (Hahn) is a single mother in her 40s who works as the executive director of a senior center. She drops off her only child at college and returns home to a very empty house.

Meanwhile, Eve’s son Brendan (White), a popular (though sometimes clueless) jock, finds that college is a little more complicated than he expected. He struggles to make connections with his more socially and politically aware fellow students.

As mother and son find themselves alone for the first time, this series navigates themes of parenthood, sexuality, love, and identity in a cultural moment when attitudes about gender and sex are evolving rapidly.

What do you think? Do you like the Mrs. Fletcher TV show on HBO? Do you think it should have been renewed for a second season?

I hope this show, Mrs. Fletcher will return. I love this show. I really like Kathryn Hahn, she is funny! Please bring this back!!

Absolutely needs to be continued. DONT leave it there!

ABSOLUTE TRAGEDY! This show had SO MUCH potential for HBO! Kathryn Hahn is a VERY underrated actress. I understand that this was originally going to be a limited series,but come on HBO your sitting on pure gold! Hahn should’ve been nominated for a Emmy for this season. Again, I’m dissappointed this is being cancelled after only 7 episodes. If we’re lucky enough, maybe Netflix will pick it up. I look forward to seeing future projects of Kathryn Hahn.

I’m so disappointed there is not a second season.

I can’t believe there are only 7 episodes in this series. It should definitely be extended/renewed. How does it all play out? You can’t just leave us on a cliff hanger like this. This is not how you end a series that is this good. Give us more PLEASE!

HBO, please don’t F up and EXTEND the series NOW!!!

yessss! loved it! and it should be renewed!
i want to see how brendan does with the ending of ep 7 and how it plays out in college for him!

they should give the show a chance. it was getting interesting, it’s different than most of the other shows out there. the story line is good and given a chance with a good writing staff could be a funny adult soap opera. I just binged it too and it’s cancelled. why do these companies do this, if you thought it was a good idea and make 1 season why stop after 7 episodes. and when did 7 to 10 episodes become a season. you tv executives are ******** up tv. if you want to cancel something cancel the idiot in… Read more »

Love the show! Should be extended. I’d love to see it play out more

Renew it . Mrs Fletcher is an awesome and relatable story! So entertaining