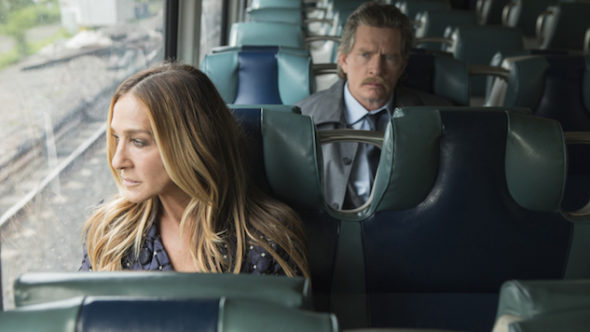 HBO and Divorce are splitting up. Deadline reports the TV show will end after its upcoming third season.

The third and final season of Divorce premieres on HBO tonight, July 1st, at 10 p.m. ET/PT.

Between scheduling and complicated lives and actors, it was a confluence of things that came together that helped us decide that six was something that we wanted to do, and we felt confidence that Liz could achieve what we were all hoping for for this final look at Frances and Robert.”

What do you think? Do you watch Divorce? How do you want the series to end?

Why take away such a good show? Loved the couple the show was mainly about,SJP and THC worked so well together and Thomas Hayden Church’s sense of humour is priceless! Very sad this show is not returning. 🙁

Loved the show Divorce – really was interested in how these characters developed and what happened to them. They felt like family. I am very disappointed it ended with Season 3 and was left so open ended.

Loved Divorce and it’s talented cast. So very sorry it was not picked up.

I really liked the show Divorce…..sad it will no longer be on ……

I loved the show divorce I just watched the last one. 🙁 I’m going to miss it. TV show suck anymore. Was nice having a fun one to watch and brought a lot of real life into the show. I wish they would continue

Personally I loved this show and am disappointed that it’s not continuing. Great acting, scripts & characters.

I HATE that Divorce. has been cancelled! Not enough clever comedies on tv these days! Will somebody PLEASE pick this up?

Sorry that “Divorce” is canceled. It was a fun show and loved the sound track. Tired of shows having no longevity…and, the so called reason is the actors can’t commit. Seriously????

Bummed, we like this unique show with a funny cast. Thomas Haden Church is a riot.