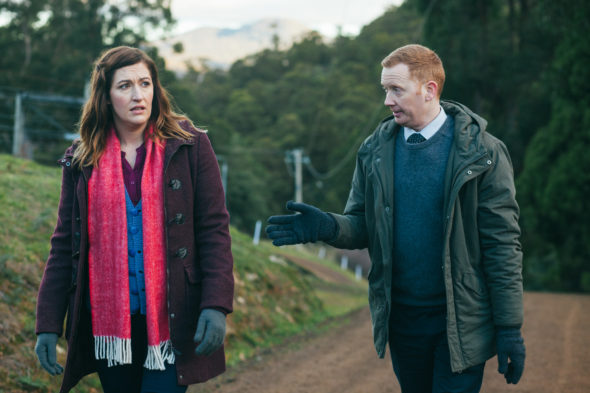 Should Daniel and Emma remain in Rosehaven. Has the Rosehaven TV show been cancelled or renewed for a fourth season on SundanceTV? The television vulture is watching all the latest cancellation and renewal news, so this page is the place to track the status of Rosehaven, season four. Bookmark it, or subscribe for the latest updates. Remember, the television vulture is watching your shows. Are you?

An Australian comedy airing on SundanceTV in the United States, Rosehaven stars creators Luke McGregor and Celia Pacquola, with Kris McQuade, Katie Robertson, David Quirk, Kim Knuckey, Noela Foxcroft, Sam Cotton, and Susie Youssef. The TV series follows Daniel McCallum (McGregor), who returns to Rosehaven, his rural Tasmanian hometown, in order to help his steamroller of a mother, Barbara (McQuade), with her real estate business. He gets quite a surprise when Emma (Pacquola), his best friend from the mainland, follows him there. Now they have to try to make a go of it, if they can hack small town life.

The third season of Rosehaven averaged a 0.02 rating in the 18-49 demographic and 112,000 viewers. Learn how Rosehaven stacks up against other SundanceTV TV shows.

Will SundanceTV cancel or renew Rosehaven for season four? Since this is a co-production with Australia’s ABC TV network, the show’s performance down under probably matters more to its survival, as Sundance shows just don’t get big ratings to begin with. I’ll keep an eye out for news and will update this page with any developments. Subscribe for free Rosehaven cancellation or renewal alerts.

What do you think? Should SundanceTV renew the Rosehaven TV show for a fourth season? How would you feel if they cancelled this TV series, instead?

They packed up late last night

Please renew the series. It’s so different than most of the sit comes in USA. The characters are intelligent, quirky and refreshingly funny.

please do not cancel this show,ill be very sad if it is not renewed..i love the Rosehaven Theme Song

I want to know Daniel, and Emma, and Barbara, even Olive forever. Please come back.

We in San Diego California love visiting with Emma Daniel Barbara and company. Please keep them coming! We will miss Grace perhaps but…

They are filming series 4. https://www.if.com.au/fresh-faces-for-season-4-of-rosehaven/

I hope we don’t lose this clever, rare series. I and many other fans will be very disappointed. There is simply nothing else like it. It’s one of a kind.

Adore Rosehaven and its quirky, sympathetic residents. The cast is brilliant, the writing hysterically funny and the length perfection. Would sorely miss this compact, hidden gem!!

Please don’t cancel this program. It’s fresh and funny and a real change of pace.

We really enjoy Rosehaven and would really miss it. It’s fresh and funny. Don’t cancel this program!