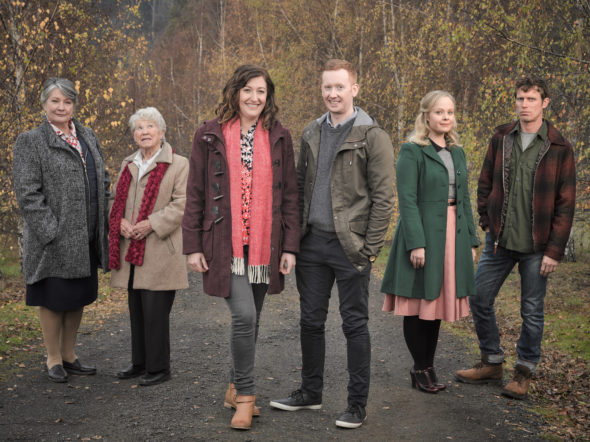 TV show description:
From real-life best friends, comedians, creators, and writers Luke McGregor and Celia Pacquola, the Rosehaven TV show is an Australian comedy series and a co-production between Australia’s ABC network and SundanceTV. The story follows Daniel McCallum (McGregor), who returns to Rosehaven, his rural Tasmanian hometown, in order to help his steamroller of a mother, Barbara (McQuade), with her real estate business. He gets quite a surprise when Emma (Pacquola), his best friend from the mainland, follows him there.

Daniel came back home to take care of the business while his Barbara was in need of surgery. Although she saw this as a stopgap measure, he decides to prove that he is cut out to take on the responsibility for himself.

Emma showed up, because while she was honeymooning in Bali, her brand new husband decided to leave their trip and the marriage. Emma’s not from Rosehaven, so she originally doesn’t have to deal with the small town’s expectations of her, the way Daniel does. For example, everyone thinks he’s back home because he couldn’t make a go of things elsewhere.

Thanks to the nature of the real estate business, and of quirky little Rosehaven itself, Daniel and Emma soon find themselves in the middle of all of the town’s goings-on. Daniel has to work through the issues he had growing up there, as much to prove something to himself as to the townies. Will they stay? Can they make it if they do? Stay tuned.


What do you think? Do you like the Rosehaven TV series? Should this SundanceTV show be cancelled or renewed for another season?