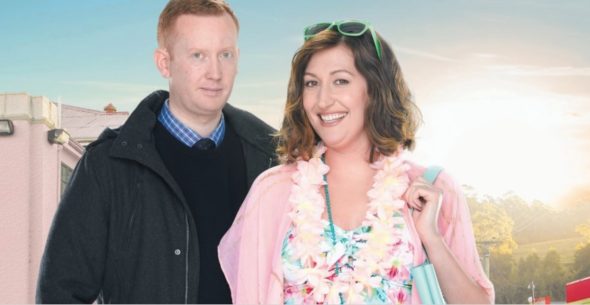 Get ready for season two of Rosehaven. The second season premiere of the series will arrive on October 25. The eight part series stars Luke McGregor and Celia Pacquola.

SundanceTV revealed more about the season two premiere in a press release. Check that out below.

The first season of the quirky small-town comedy, set in rural Tasmania, debuted in the U.S. in September, and has been praised as having “one of the best non-romantic couples on TV,” by Indiewire and TV show “worth watching” by Vox.

In season two, Daniel (McGregor) returns to his hometown, Rosehaven, after being away on the mainland with his girlfriend, Grace (Katie Robertson). Using Skype and a spreadsheet, he now must juggle the long-distance relationship while trying to prove that he has what it takes to earn his place in the family real estate business. Newly promoted at McCallum Real Estate, Emma (Pacquola) must decide if both her dangerously disinhibited locksmith “boyfriend,” Damian, and small town life are enough for her. Roommates and workmates again, Daniel and Emma go to great lengths to earn their place in Rosehaven in the only way that matters – selling a house. The question is, will it be enough?

In the premiere episode, Daniel returns to the office after his month-long hiatus and finds that things have changed while he’s been away. When a disagreement between two tenants arises, Daniel and Emma have different opinions on how to resolve it.

The series co-stars Kris McQuade (Wentworth), Katie Robertson (The Kettering Incident) and David Quirk (Please Like Me). Rosehaven is a What Horse? / Guesswork Television production presented by Screen Tasmania, Screen Australia, the Australian Broadcasting Corporation in association with Film Victoria, and SundanceTV joining as co-producers for the second season.

The series was created and written by Luke McGregor and Celia Pacquola. Kevin Whyte serves as executive producer, alongside executive producers for the Australian Broadcasting Corporation, Rick Kalowski and Brett Sleigh. Rosehaven is directed by Jonathan Brough and Shaun Wilson, produced by Andrew Walker and co-produced by Fiona McConaghy. Episodes will be available on sundance.tv the day after they air.”

Will you check out season two of Rosehaven? Tell us what you think.

Nice show to make you giggle.