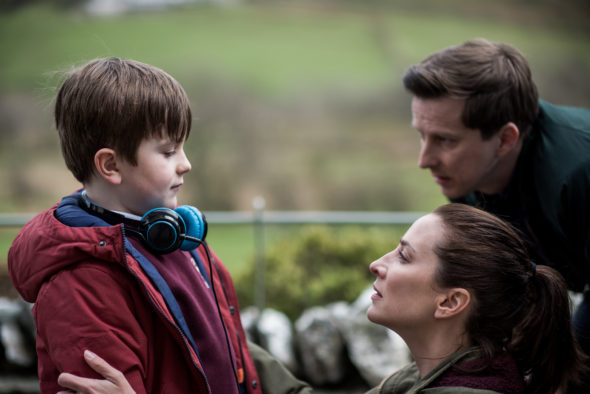 SundanceTV has announced the second season of The A Word TV show will premiere on Wednesday, November 8, 2017 at 10:00pm ET/PT. The drama centers on a family whose son is diagnosed as being on the Autism Spectrum.

“The emotions, tears and laughter ring true in this small but deeply moving and entertaining gem.”
– TV Guide

The second season of SundanceTV’s critically-acclaimed international drama series “The A Word,” will premiere on Wednesday, November 8th at 10/9c.

After receiving rave reviews in both the U.K. and U.S., the story picks up two years from the end of season one, and Joe (Max Vento) is changing. Now age seven, he has begun to look at the world and finds he doesn’t always fit in. The six-part drama revisits the funny, messy, mixed-up lives of the Hughes and Scott families as they struggle to do their best as parents, caregivers, lovers . . . and to work out what’s really important in the face of nothing ever feeling normal. The family drama stars Christopher Eccleston (“The Leftovers”) as Joe’s grandfather Maurice; Morven Christie (“Grantchester”) and Lee Ingleby (“Our Zoo”) as Joe’s parents, Alison and Paul; and Joe’s uncle and aunt, Eddie and Nicola, played by Greg McHugh (“Fresh Meat”) and Vinette Robinson (“Sherlock”).

“The A Word” is a Fifty Fathoms and Keshet UK Production for SundanceTV and BBC One. It was commissioned by Lucy Richer. The series is written and executive produced by multiple BAFTA winner and Golden Globe® nominee Peter Bowker. Executive Producers are Patrick Spence, Marcus Wilson, Howard Burch, Avi Nir and Keren Margalit (Keshet). Jenny Frayn is producer and Sue Tully is lead Director.

The English language version is based on the Israeli Keshet Broadcasting and July August Productions drama “Yellow Peppers,” created and written by Keren Margalit, who is also executive producer on the UK series.

What do you think? Are you a fan of The A Word TV series? Do you plan to check out the second season on SundanceTV?