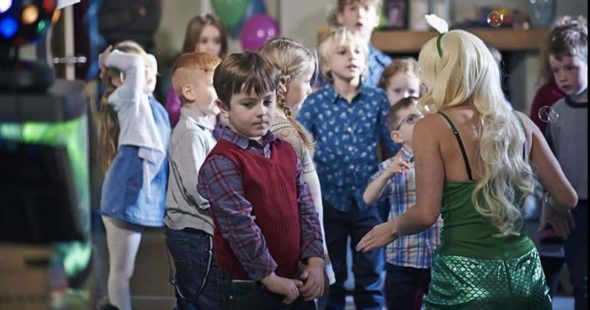 How will Joe handle the changes that are coming his way? Has The A Word TV show been cancelled or renewed for a fourth season on SundanceTV? The television vulture is watching all the latest cancellation and renewal news, so this page is the place to track the status of The A Word, season four. Bookmark it, or subscribe for the latest updates. Remember, the television vulture is watching your shows. Are you?

Airing on the SundanceTV cable channel, The A Word stars Lee Ingleby, Morven Christie, Max Vento, Molly Wright, Greg McHugh, Christopher Eccleston, Pooky Quesnel, David Gyasi, and Julie Hesmondhalgh. When five-year-old Joe Hughes (Vento) is diagnosed with Autism Spectrum Disorder, feelings bubble to the surface which only serve to highlight the tensions between the members of his extended family. In season three, Joe is now 10 years old and we revisit the Hughes and Scott families. They struggle to meet the challenges of parenthood, disability, and separation and to hold the family together around the child who needs them all.

This series is a co-production of BBC One in the UK and SundanceTV in the United States. It is difficult to predict whether the show will be renewed for a fourth season. It seems to have a devoted following so I’m leaning toward a renewal but, it’s good to keep in mind that shows about children can have a limited lifespan. I’ll keep my ears open and an eye out for news, and will update this page with breaking developments. Subscribe for free alerts on The A Word cancellation or renewal news.

What do you think? Do you hope The A Word TV show will be renewed for a fourth season? How would you feel if SundanceTV cancelled this TV series, instead?

I have been very late to the party with A word but I’m catching up on iPlayer. I’m trying to stretch out the last 3 episodes because I don’t want it to end, so I’ve my fingers crossed for another series!

I loved the ‘A‘ word and really hope it returns for a 4th series. A beautiful programme, sensitively presented. There is so much more to tell about the Hughes family and their friends and associates. It would be very very sad if this excellent series was discontinued, a favourite of mine and many of my friend’s.