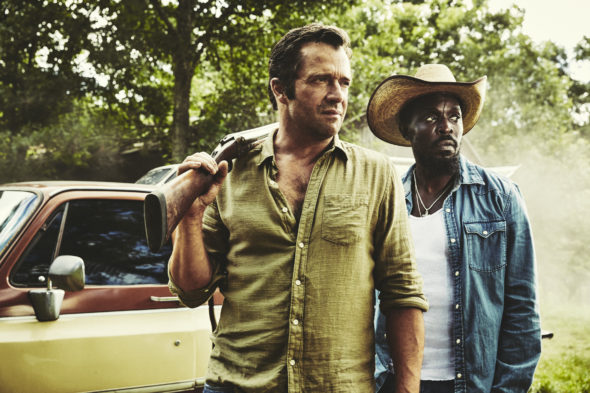 Hap and Leonard: Two Bear Mambo A Look at the Ratings

Less than a week after the April 11th season three finale, Lansdale tried to rally the troops, on social media, to push for a season four renewal.


Hap and Leonard officially canceled. Sundance's highest rated show, 100 percent on Rotten Tomatoes. Three Seasons wraps it up, dudes. It was an honor to have worked with the folks on the show, actors, crew, writers,… https://t.co/WJvpfDJEhl

The official Hap and Leonard Twitter account also sent out a message of gratitude to the cast, crew, and fans.


Thanks to the incredible cast and crew of #HapandLeonard for three unforgettable seasons….and a special thank you to the fans! pic.twitter.com/sNvsAPzRLU

It’s true. Our show has come to an end. Thank you thank you thank you for watching, re-watching, caring, engaging and calling for more. We loved every minute of making it, even when it drove us nuts. It means the world that you loved it too. /1


.@HapAndLeonard Thanks @SundanceTV @jamespurefoy @bkbmg, @joelansdale, cast, crew, producers, writers, directors and especially our diehard FANS for 3 seasons of Hap and Leonard. We will not be back.

“It has been an honor to share the adventures of Hap and Leonard with SundanceTV viewers,” a spokesman for the station told Deadline on Monday. “We thank the talented cast and crew who brought Joe Lansdale’s stories to life including John Wirth, Jim Mickle, Jeremy Platt and Linda Moran — and the extraordinarily talented Michael K Williams and James Purefoy. We aired three successful seasons of the show and are proud of the topics and relationships it explored.”

With race, sexuality, family, corruption, faith and that often undiscussed subject of the American class system among those topics explored on the noir-ish series since its March 2, 2016 debut, Hap and Leonard became the highest rated original series in Sundance TV’s history. Part of that allure was the great dynamic between Rome alum Purefoy and The Wire vet Williams in their portrayal of the two very different blue collar middle age pals. Stumbling into detective work of sorts, the three seasons of six episodes each drew from Lansdale’s Savage Season, Mucho Mojo and The Two-Bear Mambo books.

What do you think? Are you a fan of the Hap and Leonard TV series? Should SundanceTV have cancelled or renewed Hap and Leonard for season four? Sound off in the comments.

I literally cancelled AMC over this.

Loved the show can’t believe they would cancel it!! So disappointed

Loved the show, knew it was a winner when I saw the previews. Sad that it ended.

Just found out about Hap and Leonard on Netflix. finished all three episodes trying to see when season 4 is out. imagine my disappointment when I found out that it was canceled. Come on Netflix pick it up for season 4.

I hate that its been cancelled..i was ready for the next season..I LOVE THIS SHOW!!!BRING IT BACK

Just found and finished all 3 seasons within a week, soo good! Incredibly bbummed to hear it was canceled. The comedy, storylines and character dynamic was a welcomed breath of fresh air! So so sad it to see go – bring it back pretty please!!

When you get a series that has script, acting and a commentary about life that you can draw positive conclusions from, it’s a sorry day to see it cancelled. Hope that there may be a salvation of the series.

Stared watching on Netflix !! Amazing show was about to get The Sundance Chanel becauce I can’t get enough of happ and Leonard Bring it back please !!!!!

Very sad to hear Hap & Leonard has been cancelled! I enjoyed the show very much. It was such a refreshing change from most of the other mundane shows. Bring it back!!

Such a shame for such a great show! Sundance hasn’t been the same since NBC became involved. C’mon Netflix, how about picking Hap and Leonard up!?!?