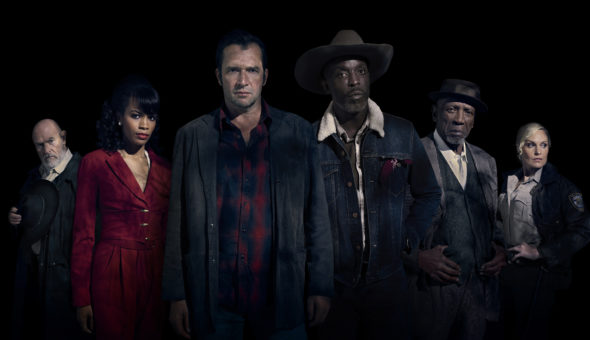 Is the third season of the Hap and Leonard TV show on SundanceTV smooth sailing or more like stormy weather? As we all know, the Nielsen ratings typically play a big role in determining whether a TV show like Hap and Leonard is cancelled or renewed for season four. Unfortunately, most of us do not live in Nielsen households. Because many viewers feel frustration when their viewing habits and opinions aren’t considered, we’d like to offer you the chance to rate all of the Hap and Leonard season three episodes here.

The darkly comedic, crime series unfolds in 1989, in East Texas, just prior to Christmas. Hap and Leonard set off to find Florida, who has gone missing in the Klan-infested town of Grovetown. With an epic storm impending, Hap and Leonard are soon confronted by a cast of characters Sundance says is, “…so tough they could chew the bumper off a pickup truck.” This gang includes a questionable sheriff, as well as the leader of the Caucasian Knights. “The boys learn that the good guys don’t always win, and nobody beats Mother Nature,” according to the network. **Status update below.

What do you think? Which season three episodes of the Hap and Leonard TV series do you rate as wonderful, terrible, or somewhere between? Are you disappointed there will be no fourth season of Hap and Leonard on SundanceTV? Don’t forget to vote, and share your thoughts, below.

**5/15/2018 Status Update: Hap and Leonard has been cancelled by SundanceTV. Details here.

I sure hope they renew this show for season 4! I love it. The casting is absolutely perfect. I love Michael Kenneth Williams in ANYTHING! Since THE WIRE, I try to see everything he plays in. And James Purefoy is a treasure. I look forward to each episode and the only disappointment is that it doesn’t last long enough!

The best show on TV! The cast is absolutely superb! Best writing, direction and gorgeous cinematography. The stories and adventures of two best friends are just wonderful, a delight and remarkable. What’s not to love. Hap and Leonard definitely deserves to have a 4th season!

Best show on TV! The cast is absolutely superb. The writing, the direction, and the cinematography is brilliant. Definitely a 4th season is in order for this series. A HUGE fan base to boot!

Loved the first episode of season 3/Two-Bear Mambo. Hap & Leonard is such a clever, quirky show. Hands down my favorite tv series! It’s laugh out loud hilarious, violent, and somehow sweet, all at the same time. I love the friendship between Hap & Leonard. Kudos to casting!