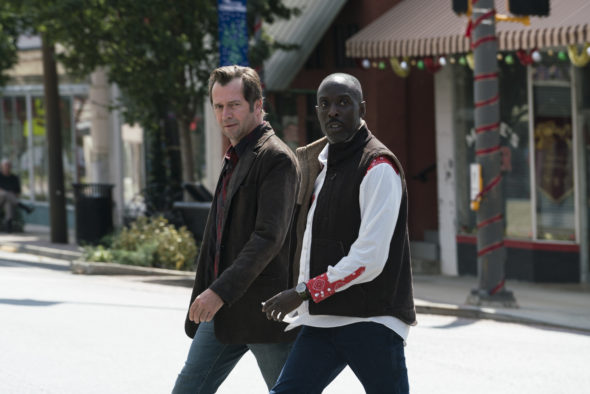 What’s happening with Hap Collins and Leonard Pines? Has the Hap and Leonard TV show been cancelled or renewed for a fourth season on SundanceTV? The television vulture is watching all the latest cancellation and renewal news, so this page is the place to track the status of Hap and Leonard, season four. Bookmark it, or subscribe for the latest updates. Remember, the television vulture is watching your shows. Are you?

The darkly comedic, crime drama unfolds in 1989, in East Texas, just prior to Christmas. Hap and Leonard set off to find Florida, who has gone missing in the Klan-infested town of Grovetown. With an epic storm impending, Hap and Leonard are soon confronted by a cast of characters Sundance says is, “…so tough they could chew the bumper off a pickup truck.” This gang includes a questionable sheriff, as well as the leader of the Caucasian Knights. “The boys learn that the good guys don’t always win, and nobody beats Mother Nature,” according to the network.

The third season of Hap and Leonard  averaged a 0.04 rating in the 18-49 demographic and 200,000 viewers. Compared to season two, that’s down by 20% in the demo and up by 15% in viewers. Learn how Hap and Leonard stacks up against other SundanceTV TV shows.

Will SundanceTV cancel or renew Hap and Leonard for season four? It’s really hard to say. Viewership is up but the numbers are really small. I suspect this show’s survival prospects have a lot to do with other factors, including if the talent wants to continue making another season. I think it will be renewed but it could easily be cancelled. I’ll update this page with breaking developments. Subscribe for free Hap and Leonard cancellation or renewal alerts.

5/15/2018 Status Update: Hap and Leonard has been cancelled by SundanceTV. Details here.

What do you think? Should SundanceTV have cancelled or renewed the Hap and Leonard TV show? Is it ending at the right time, or are you upset there will be no for season four?

Whenever I see those people, I have fun and hap and leonard have done amazing work.

I love the show and all the actors