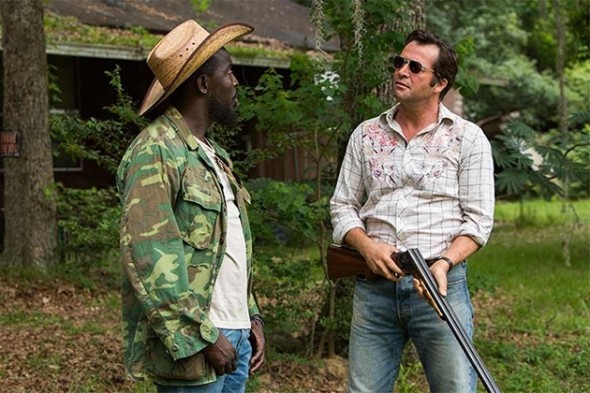 Hap and Leonard are back in action. Recently, SundanceTV announced production has begun on season three of the TV show.

Season three of Hap and Leonard is set to premiere on SundanceTV in early 2018.

When Florida Grange goes missing in the Klan-infested town of Grovetown, Hap and Leonard set out to find her. As the mystery unfolds, Hap and Leonard find themselves at odds with a cast of characters so tough they could chew the bumper off a pickup truck, including a possibly corrupt sheriff, and the leader of the Caucasian Knights. Set once again in East Texas, against an impending storm of Biblical proportions, Hap and Leonard scramble to locate Florida before the Klan locates them. The boys learn that the good guys don’t always win, and nobody beats Mother Nature.

Louis Gossett Jr. said, “I’m beyond thrilled to be joining the Hap and Leonard family – especially getting the opportunity to work with Michael Kenneth Williams again, whom I consider a son. It’s now come full circle.”

“I can’t wait roll up my pants and dredge through this rollercoaster of a season with the likes of Hap and Leonard. I just love this show!” added Andrew Dice Clay

Corbin Bernsen said, “I’m thrilled to join this gem of a show and superb cast that, like so many projects I’ve been associated with in the past, is like a fine wine… time to pop the cork and share with the world.”

Season one was inspired by the first “Hap and Leonard” novel “Savage Season,” and featured Christina Hendricks (“Mad Men”) and Jimmi Simpson (“Westworld”). The second season took inspiration from “Mucho Mojo,” the second book in the series, and welcomed Brian Dennehy (“Death of a Salesman”) and Irma P. Hall (Soul Food).

What do you think? Are you a fan of Hap and Leonard? Are you excited for season three?

Right after the last season finale i read on this site that Hap and Leonard was cancelled. This comes as a very pleasant surprise. I’ll definitely be looking forward to season3.