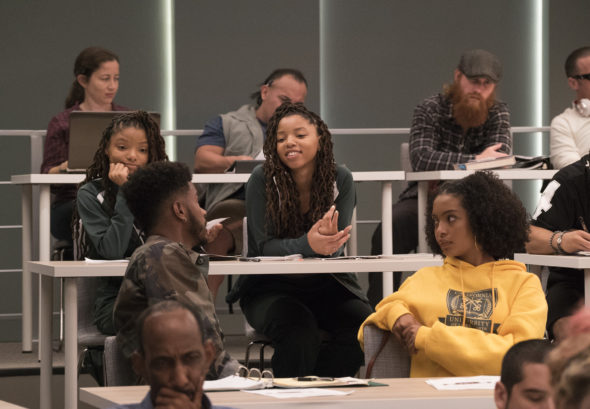 Will Zoey Johnson stay in college or drop out? Has the Grown-ish TV show been cancelled or renewed for a second season on Freeform? The television vulture is watching all the latest cancellation and renewal news, so this page is the place to track the status of Grown-ish, season two. Bookmark it, or subscribe for the latest updates. Remember, the television vulture is watching your shows. Are you?

A Freeform spin-off of ABC‘s Black-ish, the Grown-ish TV series stars Yara Shahidi, Deon Cole, Francia Raisa, Chloe Bailey, Halle Bailey, Jordan Buhat, Luka Sabbat, Trevor Jackson, Chris Parnell, and Emily Arlook, with Anthony Anderson and Tracee Ellis Ross recurring. The sitcom centers on Zoey Johnson (Shahidi), as she leaves the home of her parents, Dre and Rainbow (Anderson and Ross), and heads off to Southern California University. Now that she is finally out, and (mostly) on her own, Zoey will find that while college can be great, the fun and excitement are not without their costs. The more she learns, the more she realizes how little she knows.

The first season of Grown-ish averaged a 0.28 rating in the 18-49 demographic with 630,000 viewers. Learn how Grown-ish stacks up against the other Freeform TV shows.

Although it premiered with very good numbers for a cable comedy, it is still too early to predict whether Freeform will cancel or renew Grown-ish for season two. Generally speaking, Freeform TV shows don’t do all that well in the ratings, but this one has something of a built-in audience, because it’s a Black-ish spin-off. Right now, I predict a second season renewal, but I’ll keep an eye on the Nielsens and update this page with breaking developments. Subscribe for free alerts on Grown-ish cancellation or renewal news.
1/18/18 update: Freeform has renewed Grown-ish for a second season. Details here.

What do you think? Are you glad that the Grown-ish TV show has been renewed for season two? How would you feel if Freeform had cancelled this TV series, instead?

They renew this way too soon! The ratings demographics are not even average for even for the quality of the network that it is. It’s all political why the show is on in no other factors than the type a race of people who are in it other then the quality of the comedy or drama.

never watched Blackish, but this show is honestly amazing, I absolutely love it. everyone needs to tune in.