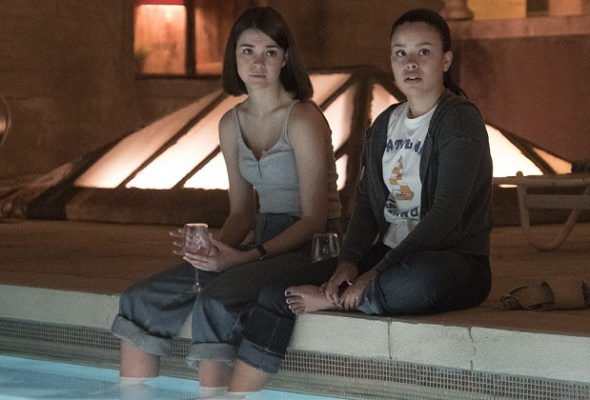 Freeform is ready for the new year. The network just released its January 2019 lineup, which includes the premiere of The Fosters‘ spin-off series, Good Trouble.

A drama, Good Trouble (January 8th at 8 p.m. ET/PT) “follows Callie (Maia Mitchell) and Mariana (Cierra Ramirez) as they embark on the next phase of their young adult lives in Los Angeles, as Mariana tackles the male-dominated world of tech and Callie faces the harsh realities of the federal legal system clerking for a federal judge.” 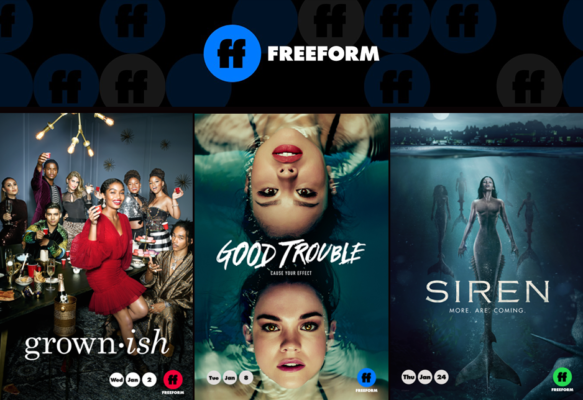 Jan. 2 (8:00-8:31 P.M. EST)—Episode #2001—“Better”
Zoey and the gang return for their sophomore year and Zoey is determined to make the “sequel” better than the original. She, Ana and Nomi move into a less-than-stellar off-campus apartment and have to quickly adjust to each other as roommates. Zoey is excited to see Luca again after a summer of keeping in touch via social media.

Jan. 2 (8:31-9:02 P.M. EST)—Episode #2002—“Nothing Was the
Same”
Zoey feels insecure when she realizes that her friends don’t see her relationship with Luca as #RelationshipGoals, prompting her to try a little too hard to prove that what they have is special. In his first move as an RA, Aaron organizes a movie night to build community … but his film choice does nothing to help people unwind.

Jan. 9 (8:00–8:31 P.M. EST)—Episode #2003—“New Rules”
Zoey struggles to make amends after accidentally breaking one of the group’s unspoken social rules and upsetting both Jazz and Luca. After Aaron and Vivek’s kickback is shut down by campus police, they try to find other ways to turn up.

Jan. 23 (8:00–8:31 P.M. EST)—Episode #2005—“Girls Like You”
When Nomi’s endless string of one-night stands starts to throw off the apartment dynamic, Zoey and Ana confront her. Aaron encourages Ana to let loose for a night and the friends all agree to check off an item from their bucket list.

Jan. 30 (8:00–8:31 P.M. EST)—Episode #2006—“Love Galore”
When Luca faces an exciting, high-pressure assignment for his design class, Zoey starts to wonder if she’s made a mistake in her future career choice. Jazz and Sky are frustrated when they see that an untalented but undeniably sexy basketball player is receiving more attention than they are and debate with Aaron and Vivek if body image trumps skill.

Jan. 8 (8:00–9:00 P.M. EST)—Series Premiere—“DTLA”
We pick up where “The Fosters” ended, 5 years in the future, with sisters Callie & Mariana graduating college and moving to downtown Los Angeles. Living with a group of friends in a community style living space, Callie and Mariana navigate the beginning of their careers—Callie clerking for a conservative judge and Mariana in the male-dominated tech space. The sisters and best friends will navigate love, sex, and the complicated relationships that come with living in a new city in your 20s.

Jan. 15 (8:00–9:01 P.M. EST)—Episode #1002—“The Coterie”
The residents of the Coterie throw an epic party, which Jude attends. Callie puts aside work for one evening to finally let loose and enjoy herself, but will it put her job as a law clerk in jeopardy? Meanwhile, Mariana tries to make friends with her new co-workers since she still feels like an outsider. Alice gets some upsetting news about her ex-girlfriend, Sumi, while Malika is confronted by her foster care past.

Jan. 22 (8:00–9:01 P.M. EST)—Episode #1003—“Allies”
Callie’s love life heats up, especially after she reaches out to an old friend for some legal advice. Mariana’s attempt to get ahead at work has surprising consequences. Gael’s sister, Jazmin, reaches out to him for help.

Jan. 29 (8:00–9:01 P.M. EST)—Episode #1004—“Playing The Game”Judge Wilson invites Callie and the other clerks over for a seemingly friendly BBQ that takes an unexpected turn. Mariana deals with a lack of diversity in her workplace and questions whether it’s the right place for her. Alice struggles with the responsibilities of managing the Coterie.

Jan. 24 (8:00–9:01 p.m. EST)—Episode #2001—“The Arrival”
With more mermaids landing at Bristol Cove’s shores, the threat of discovery increases. After his encounter with the siren song, Ben tries to cope with the after effects. Maddie’s mom (Garcelle Beauvais) returns to town and tries to connect with her daughter. Meanwhile, Ryn attempts to adapt to life on land.

Jan. 31 (8:00–9:01 P.M. EST)—Episode #2002—“The Wolf at the Door”Ben, Maddie and Ryn desperately try and keep the newly arrived mermaid pack hidden from the rest of the town, but the new mermaids’ quick degradation on land forces them to get them back to the sea unnoticed during the town’s Mermaid Beauty Contest. Elaine grows more suspicious of Helen and her connections to their family.

What do you think? Do you watch Freeform?