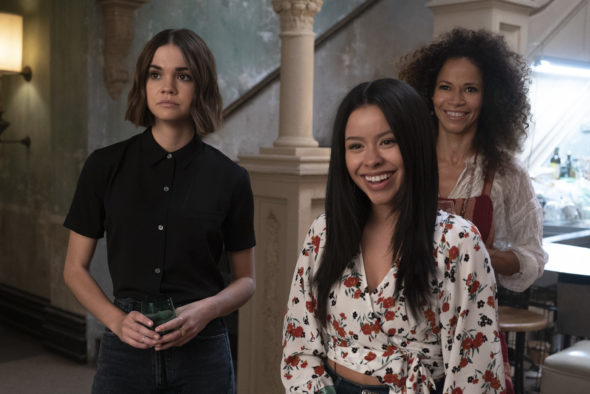 It’s no trouble to share this good news. Freeform has renewed its Good Trouble TV show for a second season. The sequel to the cancelled TV series, The Fosters is only part-way through its first season, so this good news comes good and early, too.

A Freeform family drama, Good Trouble starsMaia Mitchell, Cierra Ramirez, Tommy Martinez, Sherry Cola, Zuri Adele, and Roger Bart. The story centers on Callie (Mitchell) and Mariana (Ramirez), from the original series, as the sisters decide to spread their wings and establish themselves as young adults in Los Angeles.

Here’s the Freeform press release about the season two renewal.

FOR A SECOND SEASON

At today’s Television Critics Association Winter Press Tour, Freeform
President Tom Ascheim surprised the cast members of “Good Trouble” with a
season two pickup of the critically acclaimed series, which is currently
airing on the network.

The series follows Callie (Maia Mitchell) and Mariana (Cierra Ramirez) as
they embark on the next phase of their young adult lives in Los Angeles, as
Mariana tackles the male-dominated world of tech and Callie faces the harsh
realities of the federal legal system clerking for a federal judge. After
moving to The Coterie in Downtown Los Angeles, Callie and Mariana realize
that living on their own is not all that it’s cracked up to be. Faced with
new neighbors, new challenges and, of course, new romances, the sisters
must depend on one another to navigate the City of Angels.

Last week’s episode of Good Trouble, “Playing The Game,” marked Freeform’s
top drama telecast since June 2018 among Women 18-34 and Females 12-34 and
ranked as cable’s No. 1 scripted series among Females 12-34.

Part of Disney|ABC Television, Freeform connects to audiences and goes
beyond entertainment with bold, original programming and immersive social
engagement. As Disney’s young adult television and streaming network, it
delivers a unique mix of quality original and acquired series, plus
fan-favorite movies and the holiday events “31 Nights of Halloween,” “Kick
Off to Christmas” and “25 Days of Christmas.” The Freeform app is a service
that allows viewers with participating TV subscription services access to
24/7 live viewing of the network, as well as continued on-demand access via
a wide array of devices.

Good Trouble: A Look at the Ratings

The first season of Good Trouble is averaging a 0.16 rating in the 18-49 demographic with 346,000 viewers. Learn how Good Trouble stacks up against the other Freeform TV shows.

What do you think? Are you a fan of the Good Trouble TV series? Do you plan to tune in for season two on Freeform?

Thia show is phenomenal. I’m gtting ready to look at it again. I want a season 3

I feel that the fosters show out weighed this show, although entertaining it doesn’t have the warmth and family feel as the fosters did.

Good Trouble is entertaining with the different situations that are very real. I liked the Fosters but this is much better. And I really like that some of the Foster family visit for for a little drama!!

I love the show but you need to cut down on the commercials. There are more of them then there is show. Two scenes then ten to twelve commercials. Please see what you can do or I think I will have to watch something else in that time slot.