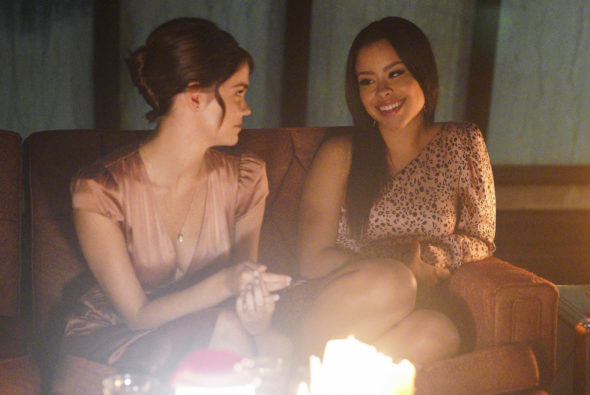 Callie, Marina, and their friends are returning for 2021. Freeform has announced that the long-awaited third season of the Good Trouble TV show will debut on Wednesday, February 17th, at 10:00 PM.

A Freeform family drama, Good Trouble stars Maia Mitchell, Cierra Ramirez, Tommy Martinez, Sherry Cola, Zuri Adele, Emma Hunton, and Josh Pence. The story centers on Callie (Mitchell) and Mariana (Ramirez) from The Fosters series as the sisters spread their wings and establish themselves as young adults in Los Angeles, living in Downtown’s fashionable residence, The Coterie. In the second season, they fought for equality and learned how to stand up for their values. They also dealt with all the challenges of young adulthood, including breakups.

Season two finished airing in March 2020 and the series had already been renewed for a third year in January. In May, Freeform announced that season three wouldn’t begin airing until sometime in 2021, likely because of the pandemic and production shutdown. Here’s the cable channel’s date announcement:

What are sisters for if not judging…
______
Good Trouble Season 3 premieres Wednesday, February 17 at 10p|9c on Freeform pic.twitter.com/jqxWlXDMVe

What do you think? Do you enjoy watching the Good Trouble TV series on Freeform? Will you be tuning in for season three?

I love this show it’s very real. As a 70 year old I can say well done.

I’m 65 and love this show. I loved The Fosters and it’s wonderful watching them grow up. Best part is when their Moms and siblings are on the show.

I have enjoyed this show from the beginning and binge watched every day until the end. I am so excited for a Season 3. I can not wait.

Glad to see it finally coming back on air,

I would love to see Callie becoming successful she has suffered enough. Breaking up with her boy friend and losing her job is making this whole show so depressing! Callie is awesome I wanna see her become something great and giving back for the community In The way she needed them back in the day!!!