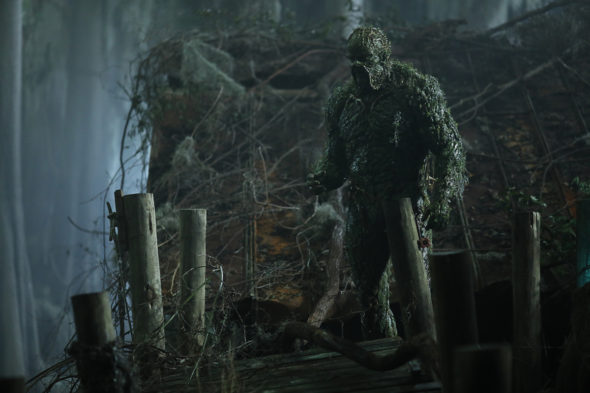 Due to The CW’s regular shows being delayed by the pandemic, the smallest network has decided to license and air preexisting series. Swamp Thing originated on the DC Universe streaming service and was cancelled after one season. While airing episodes on The CW seems unlikely to spawn a second season renewal at this point, perhaps the characters’ story could continue in some way. After all, John Constantine (another DC Comics character) found new life on CW’s Arrow and DC’s Legends of Tomorrow after Constantine was cancelled by NBC. Could something like that happen again? Stay tuned.

A superhero-horror drama series, Swamp Thing stars Crystal Reed, Virginia Madsen, Andy Bean, Derek Mears, Henderson Wade, Maria Sten, Jeryl Prescott, Will Patton, Leonardo Nam, Kevin Durand, Jennifer Beals, and Ian Ziering. Based on DC Comics stories, the series centers on Dr. Abby Arcane (Reed) who returns to her Louisiana hometown, in order to investigate what is believed to be a lethal swamp-borne virus for the Centers for Disease Control (CDC). The swamp, it seems, is home to some frightening supernatural secrets. As they start to surface, no one is safe.

12/23 update: You can see the latest night’s ratings in context.

What do you think? Do you like the Swamp Thing TV series on The CW? Should it be renewed for a second season or revived in some other way?

Merry Christmas everyone! Here’s a petition to sign up on.
https://www.change.org/p/dc-universe-save-swamp-thing-on-dcu

It will be cancelled. All the good shows are! Almost a guarantee – if it’s great, it gets cancelled. It’s why I stay away from any new shows now. Fill the time with idiot Gilmore Girl spin offs – they get renewed for the small mentality of humanity. Take Emergence, for example. Too complex and intricate for the small minded people the networks must keep happy now. I am a very aware and tech savvy 68 year old. Unusual in this day and age. My opinions no longer count. I, for one, watch almost ALL Internet TV now. The days… Read more »

It was already cancelled over a year ago. The original version was on a streaming service from May – August 2019. The super edited version that The CW is airing is only on to fill the time before their regular shows come back. Maybe instead of insulting humanity, you should do research first.

I agree the CW has a history of canceling well-written shows remember Ringer?? not even given a chance it had a great story now the network only caters to whiny 16-year-old girls that want nothing but an unrealistic love story

Swampthing was a favorite DC comic back in its day. I would LOVE to see it renewed for another season on the CW!
If not on broadcast, I would settle for CW Seed.

Swamp Thing should never have been cancelled after one season. The CW should pick it up for a second season next year.

I agree with you 100% that show was good! Even if some people find it boring and I’m not sure why some people waste their time watching a show they find boring!

What a boring show. It’s good it was cancelled. Now cancel CRINGE Patrol or remove Cliff Steele from it.

Look creepy. Hopefully get cancelled stinker. Get rid of Star Trek Discovery and Picard on CBS all access streaming. Not good avoid those awful not worth watching.

I totally agree with you on Discovery. But you know NOTHING about The Star Trek universe if you think Picard was on the same level. You missed the entire point of Picard. The first season was SET UP for a new future for the REAL STAR TREK Gene Roddenberry envisioned. I have gone through every Star Trek show at least 5 times. I can speak for the Star Trek universe. You obviously did not watch the many series and are basing your opinions on nothing. Are you a politician by any chance?

I totally agree with you that Picard was a really good show and great Star Trek science fiction.