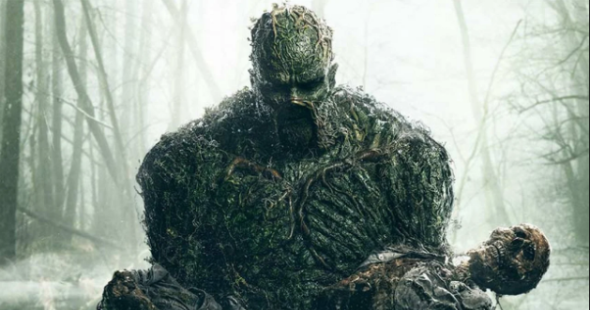 It looks like Swamp Thing is returning to the swamp. Deadline reports DC Universe has cancelled the TV show after only one season.

The DC series, which just premiered on May 31st, “follows Abby Arcane as she investigates what seems to be a deadly swamp-born virus in a small town in Louisiana but soon discovers that the swamp holds mystical and terrifying secrets.” The cast includes Virginia Madsen, Andy Bean, Crystal Reed, Will Patton, and Jennifer Beals.

According to Deadline, Swamp Thing is a casualty of AT&T’s recent acquisition of the DC Universe parent company, WarnerMedia. Earlier this year, we reported show’s first season was cut down from 13 to 10 episodes. Now, it seems the future of the entire streaming service may be up in the air as a result of the business acquisition.

What do you think? Have you seen Swamp Thing? Based on what you might have seen, would you have watched a second season?

I absolutely loved this show and enough of my shows are being canceled so please don’t cancel swamp thing!!!!!!!

Enjoyed this series. Needs to be Renewed not cancelled.

CW pick it up if it is same one

Please don’t cancel SWAMP THING!! I always loved this character! This show is way better than expected, considering SWAMP THING is one of the most underrated characters of DC!
Someone!!! Please keep this series going! I really like Doom Patrol as well but it was renewed after the 5th episode or even the second. SWAMP THING DESERVES A SECOND SEASON!!!!!!!!

I loved this show. I’ve been watching four episodes so far. I really enjoy it, intensly. I can’t believe it’s cancelled, so fast. I hope some other company/channel can pick up season two. It’s a really dark and enjoyable TV series. Please allow to continue.

Swamp Thing!!!! I just found this show and I love it, I really hope its not going to be cancelled!!!!

Hey, guys! Look what I’ve found.
https://www.change.org/p/dc-universe-save-swamp-thing-on-dcu
Let’s sign up, already. And get all our friends and families to join in.

Are you kidding me?! I would’ve liked to watch a second season. Can’t DC Universe just renew Swamp Thing for the second and final season with 13 episodes? Can’t Syfy pick it up for next season? Maybe Swamp Thing just needs to crossover to Titans or Doom Patrol.

Wow. Someone cut a show faster than ABC and SyFy and before the show even had a chance to prove whether it was any good.

After just one episode?!

Just pull the entire plug now so as not to completely waste viewers time and money.

Why would they not give it a chance! I loved the first episode!