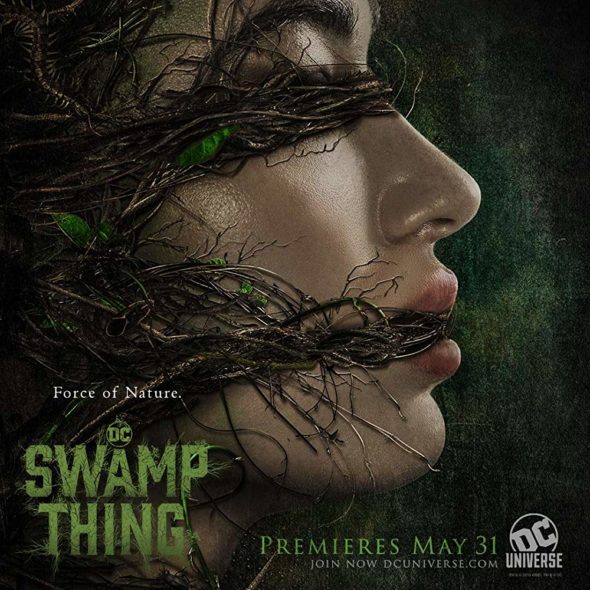 Does Abby Arcane have what it takes to get through the first season of the Swamp Thing TV show on DC Universe? As we all know, the Nielsen ratings typically play a big role in determining whether a TV show like Swamp Thing is cancelled or renewed for season two. DCU and other streaming platforms, however, collect their own data. If you’ve been watching this TV series, we’d love to know how you feel about the Swamp Thing season one episodes. We invite you to rate them for us here. *Status update below.

A DC Universe superhero drama, Swamp Thing stars Crystal Reed, Virginia Madsen, Andy Bean, Derek Mears, Henderson Wade, Maria Sten, Jeryl Prescott, Will Patton, Leonardo Nam, Kevin Durand, Jennifer Beals, and Ian Ziering. Based on the DC Comics, the superhero horror drama centers on Dr. Abby Arcane (Reed) who returns to her Louisiana hometown, in order to investigate what is believed to be a lethal swamp-borne virus for the Centers for Disease Control (CDC). The swamp, it seems, is home to some frightening supernatural secrets. As they start to surface, no one is safe.

What do you think? Which season one episodes of the Swamp Thing TV series do you rate as wonderful, terrible, or somewhere between? Should DC Universe cancel or renew Swamp Thing for a second season? Don’t forget to vote, and share your thoughts, below.

My husband and I really loved Swamp Thing. We are hoping that the CW can give it the season 2 it deserves! For those who don’t know, DC Universe canceled it, but now that the CW has it, maybe there is hope? Fingers crossed!

Swamp thing I actually thought was a great show!! wasn’t expecting it but dam I really enjoyed it keep it going!!

Should never have canceled this show that was a big mistake

We all want a season to continue with the Swamp Thing. It was a good TV show. Sad that the CW couldnt get there **** right to work on it to make it better. I could have done a better job with a season 2 instead of running. But thats the TV stations now do alittle and run the other direction with there tail between there legs.
We all want a season 2. So get on it please. been long enough. Its time to catch up!

Made for DC’s defunct streaming service, I’m surprise CW wound up with it at all. It’s production level was well beyond their capability, and I suspect it was cancelled so quickly because of cost more than anything. I’m sad that we won’t necessarily see more classic DChorror concepts adapted via this setting, but at least some of those shows are still alive…

If we’re lucky, perhaps the Swamp Thing and Blue Devil characters will carry over into another series on HBO Max.