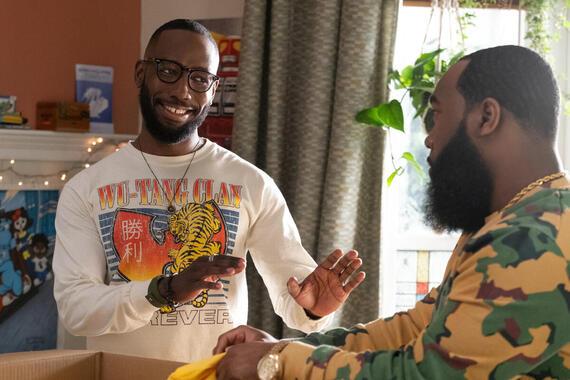 Can Keef’s life get any stranger? We’ll get a chance to find out. Hulu has renewed the Woke TV series for a second season. Woke’s first season of eight episodes was released on September 9th.

A live-action comedy series that mixes in some animated sequences, Woke is inspired by the life and work of artist Keith Knight. He created the show with Marshall Todd. The show stars Lamorne Morris, T. Murph, Blake Anderson, T. Murph, Lara Goldie, and Sasheer Zamata. In the story, Keef Knight (Morris) is an African-American cartoonist who unexpectedly finds himself on the verge of mainstream success. Keef typically makes a point of avoiding controversy but one day, he’s wrongly detained by overly-aggressive police while hanging flyers to promote his comic. Traumatized, Keef gains the ability to hear the thoughts of inanimate objects. With a fresh outlook on the world around him, Keef must now navigate the new voices and ideas that confront and challenge him, all without burning the professional and personal relationships he’d previously built.

· Starring Lamorne Morris, Woke takes an absurdist look at identity and culture through the lens of Keef – a Black cartoonist finally on the verge of mainstream success, when an unexpected incident changes everything. With a newfound consciousness, Keef must navigate the new voices and ideas challenging him, all without setting aflame to everything he’s already built.

· The comedy is a co-production between Sony Pictures Television and ABC Signature.

· Woke is yet another example of Hulu’s continued success in elevating powerful and relevant stories about the human experience from breakthrough creators and talent including Ramy, Shrill, Pen15 and upcoming series Love, Beth starring Amy Schumer.

What do you think? Did you watch the first season of Woke on Hulu? Do you plan to check out the second season when it eventually debuts?

Better renewed Helstorm marvel Hulu company said no information update really good show final straw on regular streaming except it but everything going on Disney plus such bummer. Hopefully l

Better renewed Helstorm marvel Hulu company said no information update really good show final straw on regular streaming except it but everything going on Disney plus such bummer. Hopefully l