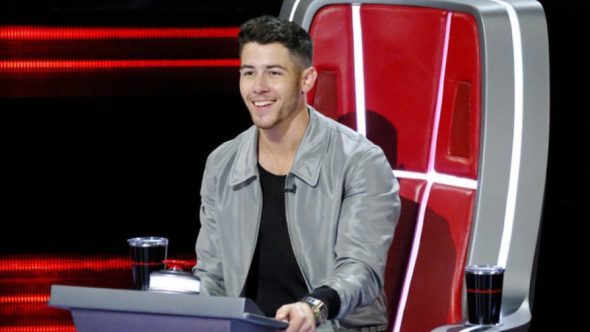 If you’re a fan of The Voice, this news will be music to your ears. NBC has officially renewed the music competition for a 20th anniversary season which will debut in Spring 2021.

MEDIA ALERT
· Multi-award-winning singer, songwriter, actor and producer Nick Jonas will be returning to “The Voice” for the show’s 20th season, which will begin in spring 2021.

· He will be joined by John Legend, Blake Shelton and Kelly Clarkson, who are the current season 19 coaches along with Gwen Stefani.

· Jonas first joined “The Voice” as a coach in season 18 (spring 2020). During that season, he brought Thunderstorm Artis to the show’s finale.

· So far season this season, “The Voice” is averaging a 1.4 rating in adults 18-49 and 9.5 million viewers in “live plus seven day” Nielsens, making it television’s #1 most-watched alternative series. Counting all digital and linear delayed viewing, this season’s Oct. 19 “Voice” premiere has grown to a 2.4 rating in 18-49 and 11.8 million viewers overall.

· “The Voice” is a presentation of MGM Television, Warner Horizon Unscripted Television and ITV Studios The Voice USA, Inc. The series was created by John de Mol, who serves as an executive producer along with Mark Burnett, Audrey Morrissey, Amanda Zucker, Kyra Thompson and Adam H. Sher.

ABOUT NICK JONAS
Nick Jonas is one third of the preeminent male group of this century, the Jonas Brothers, who most recently opened the floodgates for a new era of titans in pop music. They earned three consecutive number one albums and sold out shows throughout three continents. The tremendous success of the band provided a launch pad for the successful and storied solo careers of Nick and his brothers, Joe and Kevin Jonas, who have kept loyal fans yearning for a reunion, until last year. In 2019, the band announced their highly anticipated return to music with a new single, “Sucker,” which debuted at number 1 on Billboard’s Hot 100. Making history once more, the band captured #1 on the Billboard 200 with their Platinum-Certified album, Happiness Begins. The band continued to soar with their sold-out “Happiness Begins Tour,” with over 1.2 million tickets sold.

Nick has received critically-acclaimed solo success off his self-titled album, which includes the triple-platinum and #1 U.S. radio hit, “Jealous.” A recipient of the Songwriters Hall of Fame’s prestigious Hal David Starlight Award, Jonas co-wrote an original song titled “Home” for the movie Ferdinand, released by FOX Animation. The song was nominated for a 2018 Golden Globe in the category of “Best Original Song.”

As an actor, Nick garnered unanimous critical praise for his lead role in the 2016 Sundance Film Festival favorite Goat. He also appeared in a guest-starring role in the Fox’s horror-comedy series, Scream Queens; starred in the gritty series, Kingdom; and can be seen alongside Dwayne Johnson, Kevin Hart and Jack Black in Sony’s Jumanji: Welcome to the Jungle, which passed Spider-Man: Far From Home as the studio’s highest-grossing film ever at the U.S. box office. More recently, he starred in the sequel, Jumanji: The Next Level; Roland Emmerich’s Midway; and wrapped his first season as a coach on the four-time Emmy Award-Winning hit series, The Voice.

Up next, Nick can be seen in Lionsgate’s post-apocalyptic thriller, Chaos Walking, which stars Daisy Ridley and Tom Holland, and is set to star in AGC Studios’ action thriller, The Blacksmith, opposite Laurence Fishburne. Through his production company, Image 32, Nick executive producer the newly released TV series Dash & Lilly for Netflix.

He is the co-founder of Villa One, an ultra-premium, hand-crafted tequila alongside John Varvatos.

What do you think? Are you a longtime fan of The Voice TV show? Do you plan to tune in for season 20 on NBC?

I absolutely love the voice but do not like that Nick Jonas is coming back. Why is it that Gwen Stephani can’t stay. If she didn’t want to stay I think you could have found a better selection than Nick. Someone like Keith Urban or Reba McEntire. Reba has mentored before and she was great I’d love to see her up there. I will be hard pressed to watch this new season because of Nick he’s really a pompous ass.

Whoever produces it thinks he will bring his fangirls eyeballs to the TV, and they are all in the 18-49 demographic which they love.
I’ve heard their music, and am thoroughly unimpressed, and it makes you wonder why Hanson isn’t really popular as they’re very similar musically.
3/4 of the singers who have appeared on The Voice sing better than the actual judges, the show is a joke, and so is the current American Idol also.
If you ask me it is cruel to hype these people up, and then cast them into oblivion after the season is done.

Thank you. The Voice is fantastic and it’s the first time that I’ve been able to watch it. Please keep it going for many more seasons. Absolutely love Blake Shelton.

Hmmm Shelton has a lot of personality which makes him entertaining on the show, but music wise he is light on hits these days as are most of his fellow judges.
If you plan on having any success in the music industry you better go into Country music, or E.D.M. Pop because every other genre is non existent right now.
All the songs feel so stale for the last few years, we just aren’t as creative as we use to be!

So happy for renewed another season only been 9 years on tv made history singing history love this show I hate american idol and mask singer awful show use to American Idol was first become popular tired revival néed to end.

Am I the only one who absolutely hates this show?
All it is a big pay day for the judges, and after the show the winner, and finalists are forgotten.
At least with American Idol they would do nationwide tours with several of the finalists from the season.
This show I can’t name one popular singer that has won it, and it is in the 20th season.
What this show confirms is if you aren’t any good at writing songs, you will be theme park, cruise ship cover singers.