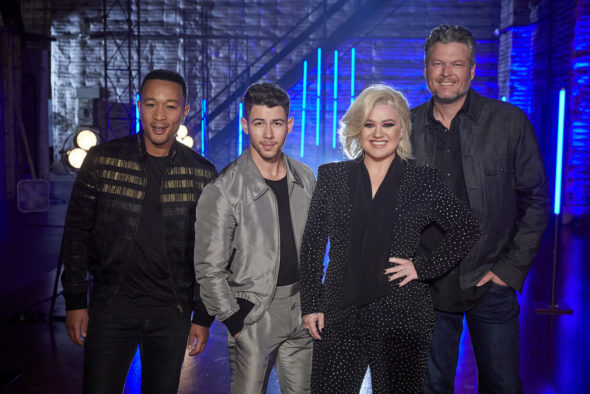 Which judge’s singer will be victorious? Has The Voice TV show been cancelled or renewed for a 19th season on NBC? The television vulture is watching all the latest cancellation and renewal news, so this page is the place to track the status of The Voice, season 19. Bookmark it, or subscribe for the latest updates. Remember, the television vulture is watching your shows. Are you?

Find out how The Voice stacks up against other NBC TV shows.

Will NBC cancel or renew The Voice for season 19? This series remains one of the top-rated shows on network television. I have no doubt that NBC will renew it for cycles 19 and 20 for the 2020-21 season. I’ll update this page with breaking developments. Subscribe for free alerts on The Voice cancellation or renewal news.

What do you think? Are you glad The Voice TV show has been renewed for a 19th season? How would you feel if NBC cancelled this TV series, instead?

Love the show, would really hate for it to be canceled . Only thing I don’t like about it is too much Gwen Stefani. I liked it better when all coaches were fighting against each other for contestants . With her there it’s too much about her and Blake. Go back to rotating the judges, instead of her so much.

Such great talent singer love it can’t wait to watch it every week. Omg.

I would absolutely be so disappointed if The Voice does not continue with the show. It’s a fun show to watch and addicting. Blake and Gwen are great!!!

Melody in the Mountains

The Voice is the best show on Tv in my opinion. It’s a show that anyone can enjoy from kids to the elderly. I never miss it and it would be devastating to NBC to cancel it

Its a great show, with amazing talented icons mentoring upcoming talent. I would be truly disappointed if the show is canceled. Its a great show with an amazing platform for artists to be displayed and discovered

I love the voice

You take off the voice and will NEVER watch NBC again

The very thought of no Blake Shelton on my TV on the
Voice makes me ill.

I love the voice, please do not cancel