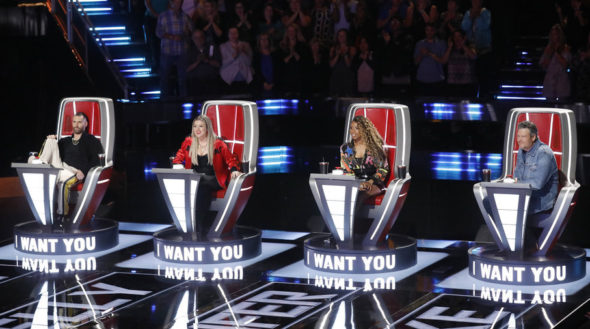 Sing it out. You want to know if The Voice TV show has been cancelled or renewed for a 16th season on NBC? The television vulture is watching all the latest cancellation and renewal news, so this page is the place to track the status of The Voice season 16. Bookmark it, or subscribe for the latest updates. Remember, the television vulture is watching your shows. Are you?

Will NBC cancel or renew The Voice for season 16? Although the network didn’t issue an official 16th season renewal release, it has already announced John Legend will serve as a coach during the Spring 2019 cycle. I’ll update this page with breaking developments. Subscribe for The Voice cancellation or renewal alerts.

What do you think? Are you happy The Voice TV series seems to be renewed for a 16th season? How would you feel if NBC cancelled this TV show, instead?