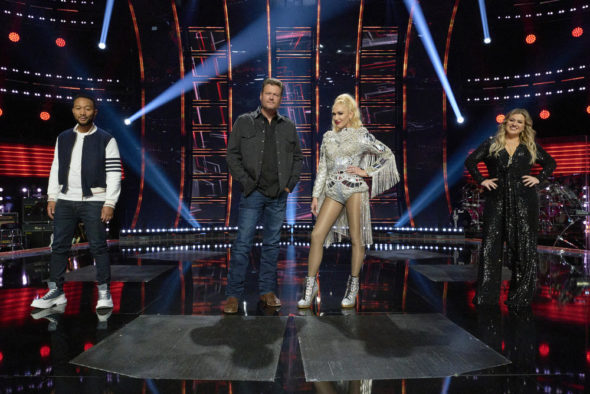 Does this season hit the right notes? Has The Voice TV show been cancelled or renewed for a 20th season on NBC? The television vulture is watching all the latest cancellation and renewal news, so this page is the place to track the status of The Voice, season 20. Bookmark it, or subscribe for the latest updates. Remember, the television vulture is watching your shows. Are you?

The Tuesday editions of the 19th season of The Voice averaged a 0.96 rating in the 18-49 demographic and 7.35 million viewers. Compared to the Tuesday episodes in season 17 (which aired Fall 2019), that’s down by 25% in the demo and down by 10% in viewership.
Find out how The Voice stacks up against other NBC TV shows.

Will NBC cancel or renew The Voice for season 20? The network hasn’t announced that the series will have a Spring 2021 cycle but, unless something unexpected happens to prevent it, I’m sure it will happen. I’ll update this page with breaking developments. Subscribe for free alerts on The Voice cancellation or renewal news.

What do you think? Are you glad that The Voice TV show has been renewed for a 20th season? How would you feel if NBC somehow cancelled this TV series, instead?

I wished the show would return without Gwen Stefani. I stopped watching it before due to the attention given to the relationship between Gwen and Blake rather than the contestants. I feel the show lacks professionalism when the couple is part of the judges. So, I’ve tried watching the first few showings of season 20, but I’ll wait until the judge panel is free from the fake bickering between the couple over the contestants. Also, it seems unfair to the contestants and audience to have the couple as judges.

This is the best show on TV. Hope it never gets cancelled!!!

I DONT BELIEVE YHE BOICE IS COMING BACK AND NEITHER DO THE JUDGES. USUALLY WHEN SOMEONE DOESNT GET A BUZZER THEY TELL THEM TO WORK ON THEMSELVES AND COMEBACK NEXT TIME. SO FAR THAT HADNT BEEN SAID TO ANY OF THE CONTESTANTS