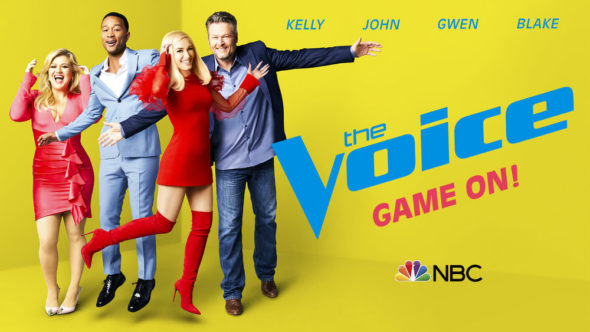 After 16 seasons, coach Adam Levine has left The Voice on NBC. It’s been a very successful series for the peacock network but the ratings have significantly declined over the years. Will they see a bigger-than-usual drop this time around now that Levine’s gone or, could they possibly rise? Will The Voice be cancelled or renewed for season 18? Stay tuned. *Status update below.

What do you think? Do you like The Voice TV series on NBC? Should it be cancelled or renewed for an 18th season?

*Update: NBC has confirmed that The Voice has been renewed for season 18 for Spring 2020.

Some aren’t happy unless they’re complaining. Who judges the show, has little to do with a ratings drop. it’s a lack of a pay off. and the fact it’s a one trick pony. judge the singing skills of the contestants that’s it. Name one VOICE winner in the top 200 on the charts there isn’t one ..There are a lot of Miranda fans still pissy after 4 yrs below they’re busy chasing their tails, over something that won’t change.

This season is one of the most boring of them all. I’ve stopped watching and couldn’t care less who wins.

I do not like this season because it’s turned out to be the Blake and Gwen show. I have never missed a show, but I have elected not to follow this season.

I don’t like the Gwen/Blake stuff either. I actually can’t stand John Legend and his hateful disrespect for Pres Trump so I haven’t watched for 2 years now. Life is good! I miss Blake but will not watch John Legend on the show. Ratings look bad so good riddance!

I agree about John Legend and I miss Adam. When I heard Legend was coming back I stopped watching. He’s not entertaining and I thought he didnt get along well with any of the other hosts in his first season on the show. I thought he looked bored working with them. Like every talent show it gets boring watching the same thing over and over and over again and the talent is getting weak.

I had watched THE VOICE since the very first episode years ago. But, over the last 3 or 4 years, it hasn’t been that great — so the point that I had started fast-forwarding through the last show of each season, mostly just watching the guest performers. I finally quit watching with this season (17) — not only because I didn’t have high expectations, but also because John Legend is now on the show, as well as Gwen Steffani. I used to like John Legend, but his horrific comments about our current president have made me change my mind about… Read more »

I quit watching it two years ago. It’s not the same show it started out to be. To many bio videos of contestants at the beginning. You don’t see half of the contestants any more until half of season is over with. It’s just not the same as it used to be. Oh well, either was American Idol and then that went off the air. The Voice is following that same pattern and it to will go away.

Much better without Gwen, she makes it all about her and Blake instead of the singers–sorry but Miranda would have done a much better job at coaching

We quit watching the show because of John Legend & his wife’s negative publicity on the news towards the nations elected by “The People” officials in Washington. No class.

Exactly why I quit the show. Are there 2 more hate-filled people than John Legend and his wife? Don’t even miss the show anymore.

I THINK ADAM LEVINE SHOULD COME BACK. THE SHOW SEEMS TO BE THE BLAKE AND QUEN SHOW. I THINK IT’S NOT THE VOICE IT’S THE QUEN AND BLAKE SHOW. I KNOW IF THIS CONTINUES I WON’T WATCH ANY MORE. GET QUEN OUT OF THERE SHE HOGS THE ENTIRE SHOW. ******** I SAY