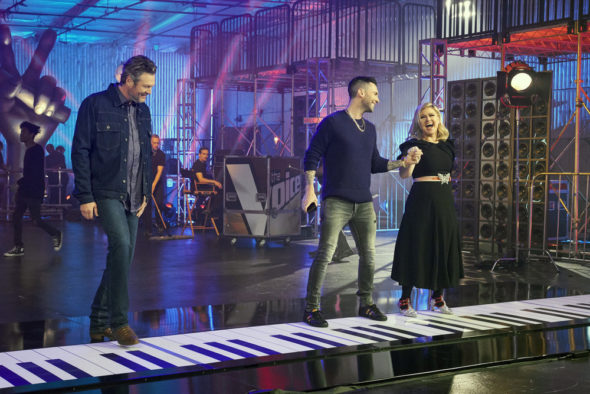 In its 16th season, is The Voice TV show on NBC still hitting all the right notes? As we all know, the Nielsen ratings typically play a big role in determining whether a TV show like The Voice is cancelled or renewed for season 17. Unfortunately, most of us do not live in Nielsen households. Because many viewers feel frustration when their viewing habits and opinions aren’t considered, we’d like to offer you the chance to rate all the season 16 episodes of The Voice here. **Status update below.

What do you think? Which season 16 episodes of The Voice TV series do you rate as wonderful, terrible, or somewhere between? Should NBC have cancelled or renewed The Voice for a 17th season? Don’t forget to vote, and share your thoughts, below.

Don’t like the crossover! If it wasn’t for Kelly I’d probably stop watching !

NBC’s The Voice, Is one my favorite reality TV shows, and NBC The Voice Is by far the best reality singing competition show of any and all reality singing competition shows that are or have been on any TV Network! The Voice really is such a great show and it gives singers all across America and in other countries as well a chance of lifetime, who are pursing their dreams in music as singers/artist’s it gives them a chance and a great platform to showcase their singing/artists talents and allows them to work with some of the most amazing dedicated… Read more »