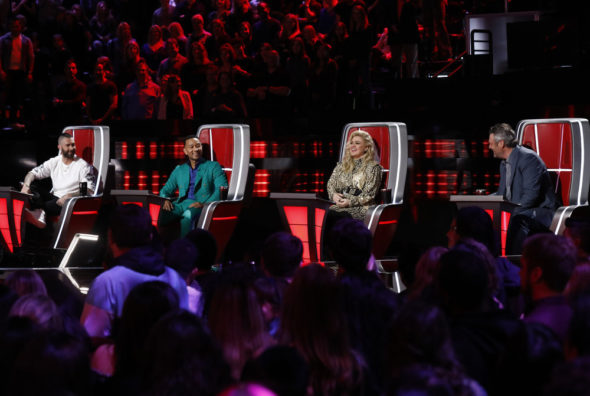 Though the ratings continue to drop, The Voice TV show continues to hit the right notes for NBC. To the surprise of no one, the peacock network has renewed the singing competition for season 17 for Fall 2019 and will have the same judges as season 16. It’s presumed that the series will also return for season 18 for Spring 2020.

Though the ratings are not what they used to be, both the fall and spring cycles of The Voice have continued to be among NBC’s highest-rated shows of the 2018-19 season.

Here’s NBC’s announcement about the hosts:

The current season continues with the Top 8 performance show on Monday, May 13 (8-10 p.m. ET/PT). The Top 8 artists perform in front of the coaches for America’s vote, and in a “Voice” first, the Top 8 will pair up to perform duets on songs from the Beatles, history’s most celebrated band. The Top 4 finalists will be revealed on the live show airing Tuesday, May 14 (9-10 p.m.).

This season the Monday and Tuesday editions of “The Voice” are combining to average a 2.1 rating in adults 18-49 and 11.1 million viewers overall in “live plus seven day” Nielsens. The Monday edition has won the timeslot versus regular broadcast competition with 22 of 23 telecasts to date in 18-49 (“live plus same day”) and leads the timeslot versus regular Big 4 competition in every key ratings category.

ABOUT KELLY CLARKSON
Kelly Clarkson is among the most popular artists of this era with total worldwide sales of more than 25 million albums and 36 million singles. Clarkson has released eight studio albums, one greatest hits album and two children’s books. She is the recipient of an array of awards, including three Grammy Awards, four American Music Awards, three MTV Video Music Awards, two Academy of Country Music Awards, two American Country Awards and one Country Music Assn. Award. She is also the first artist to top each of Billboard’s pop, adult contemporary, country and dance charts. Clarkson hosted the 2018 and 2019 “Billboard Music Awards” and is slated to make her daytime debut with her talk show, “The Kelly Clarkson Show,” launching in the fall on NBC.

ABOUT JOHN LEGEND
John Legend, a critically acclaimed multi-platinum singer-songwriter, has garnered 10 Grammy Awards, an Academy Award, Golden Globe, Tony Award and Emmy Award, among others. Legend, who has released six albums over the course of his career, is the first African-American man to earn an EGOT and one of only 15 people in the prestigious EGOT club. Legend starred as Jesus in NBC’s “Jesus Christ Superstar Live!” in 2018 and was nominated for an Emmy for Outstanding Lead Actor in a Limited Series or Movie for his performance. He won an Emmy as a producer in the category of Outstanding Variety Special (Live).

ABOUT ADAM LEVINE
Adam Levine is the frontman of Grammy Award-winning recording group Maroon 5, who stand out as not only one of pop music’s most enduring artists, but also one of the 21st century’s biggest acts. To date, the universally renowned Los Angeles band has achieved three Grammy Awards and sold over 56 million albums, 328 million singles worldwide and earned gold and platinum certifications in more than 35 countries. The band closed out a banner 2018 as the biggest act on U.S. radio (according to Nielsen Music) with their massive single “Girls Like You,” which hit #1 at Top 40 and on the Billboard Hot 100 for seven consecutive weeks and also reached #1 on iTunes and Spotify, all while accumulating over 660 million Spotify streams and over 1.7 billion YouTube/ VEVO views. The single has gone on to become the longest-running song on the Billboard Hot 100 Top 10 and was notably the most-watched video on VEVO in 2018. Levine will executive produce NBC’s upcoming music competition series “Songland,” alongside Eurythmics co-founder Dave Stewart and OneRepublic’s Ryan Tedder, which focuses on discovering songwriters.

ABOUT BLAKE SHELTON
Country Music Association’s 2012 “Entertainer of the Year,” five-time Male Vocalist of the Year winner and Grammy nominee, Blake Shelton continues to add to his superstar status. With 25 #1 singles and a host of platinum-selling albums and singles, the Grand Ole Opry member has earned a host of honors throughout his career, including multiple award wins from the Academy of Country Music, Billboard Music Awards, the People’s Choice Awards, CMT and many more. He has teamed with Ryman Hospitality to open a string of Ole Red entertainment restaurant venues, a nod to his 2001 hit of the same name, in his Oklahoma hometown of Tishomingo as well as Nashville and most recently in Gatlinburg, Tenn., with more locations to follow.

ABOUT CARSON DALY
Carson Daly joined NBC’s morning show “Today” in 2013 and is host of the Orange Room, its digital studio. Daly’s exclusive interviews have made headlines, including his conversations with Kevin Love, Sean Combs and Fleetwood Mac where the band announced their reunion. Daly’s long-running late night NBC series, “Last Call with Carson Daly,” is currently in its 17th season and last season, with its final episode set for May 24. “Last Call” garnered acclaim for exceptional storytelling and status as late-night TV’s unofficial music tastemaker. Daly also serves as host and executive producer of “NBC’s New Year’s Eve” live from Times Square in New York and hosts Westwood One’s nationally syndicated radio countdown show “The Daly Download,” which is heard by more than 150 markets across the country.

What do you think? Are you still watching The Voice TV show on NBC? Will you be tuning in for season 17 in Fall 2019?

Will definitely be watching The Voice!! It is the only one to watch! Love all the judges. Cant wait for the debute!

The voice is still great, people always have something negative to say, calling the judges names. People are bullies. Blake’s team is obviously better, and anyone who loves good music knows that. Maybe more people who love country watch. Kelly just has a heart, more then I can say for some of these bully comments. Love the voice, way better then American idol, who throws people off so fast, i do watch both. I love blake

I hate the format this year. Will not be watching season 17. Program has lost the heart and authenticity from its beginning. Way over produced.

Really tired of Kelly. She cuts people off when they are speaking. Says things so dumb it’s like she’s just trying to get air time. Would love to see Christina, Gwynn or Alicia back.

I agree with Renee’s comments. Cross battles bad idea. Blake is annoying. Adam hurt his team how he kept begging everyone to challenge his team. With the un balance of teams is not a good fit.
American Idol is better this year while The Voice has went down hill with the producers trying to change it up. Should be trying to make the performers do their best but more concerned about how it will look.

Kelly Clarkson and the sjws of the show completely killed it for me.. i used to watch that show religiously ..no more as long as ms.important clarkson is on..

I agree with the whole Kelly Clarkson thing. She can sing, but her connections got her farther than if she did it on her own. She cuts people off and babbles for air time. My jaw dropped when she told a contestant that her husband was Blake’s Manager. And??? That’s not her? Turn off to watch her.

The Voice has gone down hill. It was nice the season of Sawyer Fredericks but then after it started sucking. Blake and Adam drain the life out of that show with immature banter plus they are never replaced while the two middle chairs are. And too, stupid people vote for whoever because he off she is on Blake’s team. The show has gone to hell and I’ve given up. Plus the cross battles was a bad idea. Great singers gone while Blake has his. Not strange. My point.

Agree about Adam and Blake banter. Tired of that, childish nonsence.