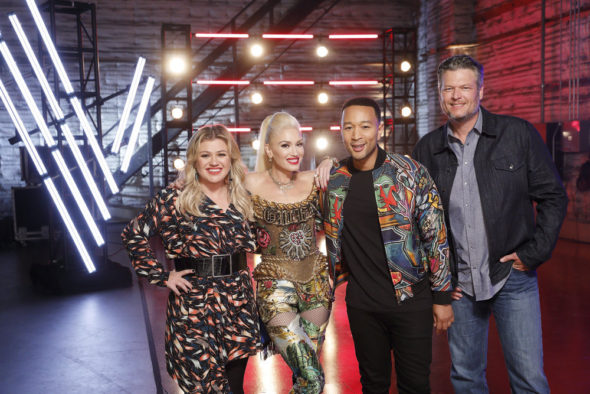 Is NBC hitting new high notes during the 17th season of The Voice TV show? As we all know, the Nielsen ratings typically play a big role in determining whether a TV show like The Voice is cancelled or renewed for season 18. Unfortunately, most of us do not live in Nielsen households. Because many viewers feel frustration when their viewing habits and opinions aren’t considered, we’d like to offer you the chance to rate all of the season 17 episodes of The Voice here. *Status update below.

What do you think? Which season 17 episodes of The Voice TV series do you rate as wonderful, terrible, or somewhere between? Should NBC cancel or renew The Voice for an 18th season? Don’t forget to vote, and share your thoughts, below.

I have been watching The Voice for several seasons, but this season I am losing interest. Too much Gwen and Blake romance and it’s just not the same without Adam. With the exception of John Legend, the rest bores me to tears.

This the best group of judges .They are so funny playing off each other .We have laughed throughout the show so much fun and love the talented people.I think this season will be the best ,you got the judges just right . Thanks

Love the voice m, but it’s not the same without Adam! Adam and Blake made the show!! I understand why Adam wanted to leave, but it’s not as good. I hope he comes back in a year!!

Liked Adam but did not like how he threw his singer under the bus!

the original voice was my favorite show on tv. Shelton, Ceylo and Levine had tremendous viewer chemistry. Clarkson is destroying this show. She’s over the top, never shuts up and definitley interfered with the chemistry of Shelton and Levine. She’s simply annoying. I watched the first show of season 17. the camera shots are less on singer and more on the judges. What’s up with that? This show is called the Voice not the Judge. Sorry but losing interest and Clarkson spikes my blood pressure.

Agree with this statement, Kelly is a bit too dramatic for my taste

Watching the Season Premiere of The Voice and am very disappointed. First, greatly miss Adam Levine! Do not like that they brought Gwen Stefani back given her current relationship status with Blake. Running over to him to say how much she wants this singer with her arms all over him and that she wants him to help her does not belong on this show. Their relationship was in the early stages when she first was on the show and there were no PDA’s. They should be forbidden this season as well or you may lose this faithful watcher, and probably… Read more »