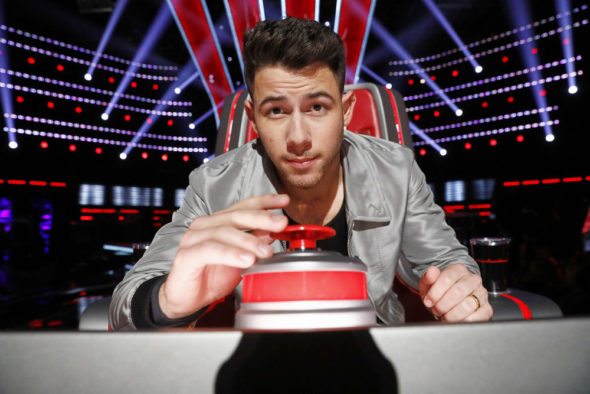 Will new judge Nick Jonas’ team be victorious in the 18th season of The Voice TV show on NBC? As we all know, the Nielsen ratings typically play a big role in determining whether a TV show like The Voice is cancelled or renewed for season 19. Unfortunately, most of us do not live in Nielsen households. Because many viewers feel frustration when their viewing habits and opinions aren’t considered, we invite you to rate all of the 18th season episodes of The Voice here. Status update below.

What do you think? Which season 18 episodes of The Voice TV series do you rate as wonderful, terrible, or somewhere between? Do you think that The Voice should be cancelled or renewed for a 19th season on NBC? Don’t forget to vote, and share your thoughts, below.

My husband and I love to watch The Voice. I was more funny when Adam was there to go head to head with Blake. We need that comedy back more, that is what makes the show of the judges part. Love to see the singers try outs. The blocking is a take away from the singer, and takes away a choice for them, maybe the block could still be used, but that judge don’t get to say anything to get them to choose them. Please renew!

Awesome lineup of coaches! Their chemistry works very well. “Anchorman” Blake, glues everyone together, Kelly is a hoot, John Legend is smooth as always and Nick Jonas reveals his talent and knowledge. Although I miss Adam v Blake, Kelly v Blake is pretty entertaining!

My husband and I consider the Voice to be the best reality and competition tv show. We’ve learned a lot about singing. The current judges have perfect team energy We enjoy them as much as the competition! The editing is seamless. Please continue this show

I watch it every year . Hope it continues .