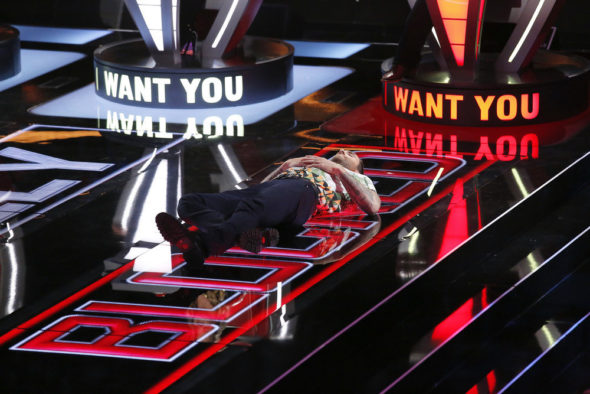 The song remains the same. NBC has renewed The Voice TV show for a 15th cycle, in the 2018-19 television season, with Jennifer Hudson and Kelly Clarkson returning as judges. Despite some drop in the ratings, The Voice is still bringing live viewers to the network, and that’s no mean feat in this day of streaming television and DVR-delayed viewing.

The Voice: A Look at the Ratings

Of all the scripted and unscripted primetime NBC TV shows we’re tracking, the Nielsen darlings that are This Is Us and Ellen’s Game of Games are its only real competition. In other words, the renewal is no surprise.

The four-time Emmy Award-winning musical competition series will return to the NBC lineup in the fall as the next batch of talented artists vie for the title of “The Voice.”

“We are so excited to welcome back Kelly and Jennifer, two dynamic forces who bring undeniable soul, passion and inspiration as coaches,” said Paul Telegdy, President, Alternative and Reality Group, NBC Entertainment. “They each have a unique understanding of what it’s like to be in the artists’ shoes. Bringing these two voices together with Blake and Adam for season 15 is sure to make this one of our best seasons yet!”

On Monday, May 14 (8-10 p.m. ET/PT), Clarkson continues on her quest to win her first season as a coach alongside fellow coaches Alicia Keys, Adam Levine and Blake Shelton during the Semi-Finals round. The Top 8 artists will perform live in front of their coaches, which will also feature “Special Duet Blends.”

Hudson has also served as a coach on the U.K. version of “The Voice” twice, winning her first season on the series.

ABOUT KELLY CLARKSON
Kelly Clarkson, who recently released her critically acclaimed eighth studio album, “Meaning of Life,” is among the most popular artists of this era with total worldwide sales of more than 25 million albums and 36 million singles. The Texas-born, Nashville-based singer-songwriter first came to fame in 2002 as the winner of the inaugural season of “American Idol.” Clarkson’s debut single, “A Moment Like This,” followed and quickly went to #1 on Billboard’s Hot 100, ultimately ranking as the year’s best-selling single in the U.S. Further, Clarkson is, without doubt, one of pop’s top singles artists, with 17 singles boasting multi-platinum, platinum and gold certifications around the world, including such global favorites as “Miss Independent” and “Because of You.” Clarkson has received a vast array of awards and nominations, among them three Grammy Awards, and was the first artist to top each of Billboard’s pop, adult contemporary, country and dance charts. Clarkson is also set to host the “2018 Billboard Music Awards,” which will be broadcast live from MGM Grand Garden Arena in Las Vegas on Sunday, May 20 at 8 p.m. ET/5 p.m. PT on NBC.

Jennifer Hudson, a true multi-hyphenate talent, won the Academy Award in 2007 for her performance in the smash hit “Dreamgirls,” an adaptation of the Broadway musical. Her breakout film performance also earned her a Golden Globe Award, Screen Actors Guild Award, BAFTA and NAACP Image Award. Hudson quickly followed with her self-titled album debut, for which she won her first Grammy Award for “Best R & B Album.” The RIAA Platinum Certified album entered Billboard’s Top 200 at No. 2. Her sophomore album, “I Remember Me,” also debuted on Billboard’s Top 10, as did her third album, “JHUD,” which featured the Grammy-nominated track “It’s Your World.” Hudson went on to receive a Star on the Hollywood Walk of Fame for Music and perform for such dignitaries as President Obama and the Pope. In 2015 Hudson won a Grammy Award for “Best Musical Theatre Album” for her performance in the Broadway revival of “The Color Purple”. In addition to her continued film and television work, Hudson has served as a coach on both the U.S. and U.K. versions of “The Voice.”

ABOUT ADAM LEVINE
As the frontman of Grammy Award-winning recording group Maroon 5, Levine has left an indelible mark on popular music. The primary songwriter for the band and a guitar player, Levine’s talents give Maroon 5 its signature sound. His heartfelt ballads and pop anthems have become part of the fabric of today’s pop music scene. The band has since gone on to have massive critical and commercial success worldwide, including a Top 40 record that boasts a total of nine #1 hits among pop groups. Maroon 5’s discography features a succession of five multi-platinum studio albums that have resulted in more than 35 million in sales, three Grammys and 12 Grammy nominations, as well as gold and platinum certifications in more than 35 countries. It’s most recent album, 2017’s “Red Pill Blues,” debuted at #2 on the Billboard 200 chart, marked the band’s sixth top 10 album was certified gold.

ABOUT BLAKE SHELTON
Country Music Association’s 2012 “Entertainer of the Year,” five-time Male Vocalist of the Year winner and Grammy Award nominee Blake Shelton continues to add to his superstar status. His latest album, “Texoma Shore,” became his sixth record to debut at #1 on the Billboard Top Country Albums chart and marked his 11th all-genre Top 10. “Texoma Shore” features his latest hit single, “I’ll Name the Dogs,” a romantic tune that boasts more than 30 million streams and became his 25th #1 single. In the week following the album launch, Shelton became the first artist in Country Aircheck / Mediabase history to have six songs chart simultaneously. “Texoma Shore” follows 2016’s gold-certified “If I’m Honest,” the best-selling country album release of the year that spawned three chart-topping songs and earned him a #1 on both the Billboard Top Country Albums and the all-genre Top Album Sales charts. A member of the Grand Ole Opry, Shelton has earned a host of honors throughout his career, which most recently include Top Country Artist at the Billboard Music Awards.

What do you think? Are you still a fan of The Voice TV series? Do you plan to tune in for season 15 on NBC?

i am so glad the voice is back for another season,but was shocked to see that JENNIFER HUDSON was coming back after the last time she was a coach,even KELLY .and is their any way we can go back to using our cell phones and phone in like we use to to instant save a person,witch was so much easy to do,i think a lot of votes are being lost because we can know long use our cell phones to instant save a person.witch is unfair when some people dont have the up to date phones.please could you look into… Read more »

Look to your neighbor … American Idol. Simon, left the show went down the tubes! Kelly is obnoxious! This is one Texan that prior to her being a judge and being so crude to Blake, I would have supported her and her team. Burleson can you do something to instill some “class”.

Love the voice !! Great chemistry with the judges, very honest and they always help their contestants! Always a fan !!

Love the voice so glad it’s back for season 15