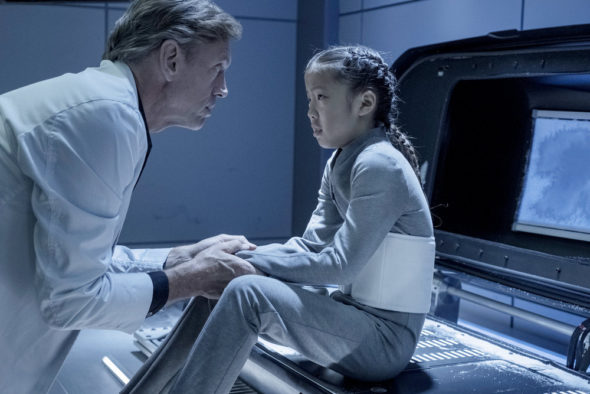 In a bit of a shocker, The Expanse TV show has been cancelled by Syfy. Although there will be no season four on the NBCUniversal-owned cable network, financier and producer Alcon Television Group plans to shop The Expanse to other buyers. News of The Expanse cancellation broke overnight, and early speculation is that Amazon — where the series is said to do well — might be a logical place to dock the Canterbury.

A Syfy drama, based on the science-fiction novels by James S. A. Corey (the pen name for authors Daniel Abraham and Ty Franck), The Expanse stars Steven Strait, Shohreh Aghdashloo, Dominique Tipper, Cas Anvar, Wes Chatham, Shawn Doyle, and Frankie Adams. The story unfolds 200 years in the future, in a colonized galaxy, when two strangers are caught up in a vast conspiracy. The Expanse also has a large stable of recurring players like Ted Atherton, Jonathan Whittaker, and Chad L. Coleman, which in season three also includes Nadine Nicole, David Strathairn, and Elizabeth Mitchell.

The third season of The Expanse kicked off on April 11th and is averaging a 0.18 rating in the 18-49 demographic and 570,000 viewers. Compared to season two, although it is currently down by 2.22% in the demo, it is up by 1.46% in total audience. While those numbers seem microscopic in comparison to the big broadcast networks, they’re not the bottom of the barrel for Syfy TV shows. At the moment, The Expanse is Syfy’s fourth-best demo performer. In terms of total viewers, it ranks seventh out of 14 scripted Syfy TV series.

Syfy’s decision not to continue The Expanse seems to come down to money. According to reports, the cabler’s deal only gives them first-run, linear rights. In this age of DVR-delayed viewing and streaming binges, that is less than ideal.

Cancelled by Syfy, Producers to Shop Season Four of The Expanse to Other Outlets

Here’s more on The Expanse cancellation and the show’s future, from Deadline.

The current third season of The Expanse will be the space drama’s last one on Syfy. The cable network has decided not to renew the show for a fourth season, with the last episode slated to air in early July. Alcon Television Group, which fully finances and produces the critically praised series, plans to shop it to other buyers.

“The Expanse transported us across the solar system for three brilliant seasons of television,” said Chris McCumber, President, Entertainment Networks for NBCUniversal Cable Entertainment. “Everyone at Syfy is a massive fan of the series, and this was an incredibly difficult decision. We want to sincerely thank The Expanse’s amazing cast, crew and all the dedicated creatives who helped bring James S.A. Corey’s story to life. And to the series’ loyal fans, we thank you most of all.”

The Expanse is one of the most well reviewed sci-fi series on TV, with the current third season scoring 100% on Rotten Tomatoes (vs. 95% for Season 2 and 76% for Season 1.)

The cancellation decision by Syfy is said to be linked to the nature of its agreement for the series, which only gives the cable network first-run linear rights in the US. That puts an extraordinary amount of emphasis on live, linear viewing which is inherently challenging for sci-fi/genre series which tend to draw the lion share of their audiences from digital/streaming.

The Expanse‘s Live+3 linear ratings started with 581K among adults 18-49 and 1.378M total viewers in Season 1. Season 2 slipped to 457K in 18-49  & 1.05M total; Season 3 to date is running just below the Season 2 averages, at 400K and 1 million, respectively. That is below the performance of Syfy’s top dramas, The Magicians and Krypton, as well as comedy Happy! but in line with a number of co-productions on the network.

“We are very disappointed the show will not be returning to Syfy,” said Alcon Entertainment co-founders and co-CEOs Andrew Kosove and Broderick Johnson. “We respect Syfy’s decision to end this partnership but given the commercial and critical success of the show, we fully plan to pursue other opportunities for this terrific and original IP.”

More about The Expanse Cancellation by Syfy

Allow me to make two personal observations on The Expanse. First of all, my son — who is graduating from high school soon and will be studying aerospace engineering in college — loves The Expanse. Being well-acquainted with his taste in television, this speaks volumes to me about the quality of this program. One viewer’s opinion means nothing to Syfy or to any potential buyer, but it tells me The Expanse deserves a television home. Personally, I hope it’s at Prime Video or Hulu, because we already pay for both, and baby needs a new pair of shoes (and by “shoes,” I mean tuition, room and board).

Secondly, I wonder about Syfy’s relationship (and now, its deal) with Alcon. In addition to writing news pieces, I do advance work for articles we publish for both new series and new season premieres, including show pages, ratings posts, Vulture Watch articles, and Viewer Votes polls. One of my tasks is to find images. Do you see the photo of Ted Atherton as Dr. Strickland and Leah Madison Jung as Mei, at the top of this article? It is the only season three episodic photograph available from Syfy on the NBCUniversal press site.

The next “newest” photos are PR appearance shots from Comic-Con International: San Diego, in July of 2017. The most “recent” photos prior to that are gallery photos from January of 2017 and August of 2015. Those dates are not typos.

Syfy is usually quite good about putting up current images on the press site, including episode photos, so it has always been both frustrating and puzzling to me, that it is so hard to come by current photos for The Expanse. They do put photos on the Syfy.com show page, but photos loaded to the press site are our preferred source and come with credit information, etc. and are usually available in advance.

I had wondered if there was some reason Syfy wasn’t making PR materials for this show readily available and figured maybe they just didn’t want to use resources to do so. Now, after having read the above report on their first-run, linear rights, I wonder if they’re restricted from doing so.

I’ll likely never get an answer to this, but I thought the lack of photos was worth mentioning. It seems to me it either speaks of a lack of faith in the project, a lack of concern about it, or it says something about their relationship and/or deal with the production company.

What do you think? Are you a fan of The Expanse TV series? Are you disappointed Syfy has cancelled it? Do you think it will be renewed for a fourth season, elsewhere? Sound off, in the comments.

After watching the Expanse via our Amazon Prime membership, I purchased and read (via Amazon/Kindle) ALL of the published book series and plan to buy the ones still coming. So, i think Amazon has benefitted greatly in both the video as well as print media, and should SERIOUSLY be looking into carrying the next several seaons. It is much better than Man In the High Castle, which I also watch qnd enjoy.