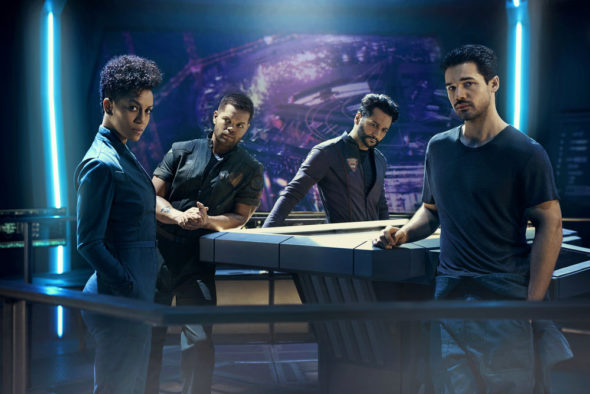 Is humanity’s fate set in stone? Has The Expanse TV show been cancelled or renewed for a fourth season on Syfy? The television vulture is watching all the latest cancellation and renewal news, so this page is the place to track the status of The Expanse, season four. Bookmark it, or subscribe for the latest updates. Remember, the television vulture is watching your shows. Are you?

A Syfy drama, based on the science-fiction novels by James S. A. Corey (i.e. the pen name for authors Daniel Abraham and Ty Franck), The Expanse stars Steven Strait, Shohreh Aghdashloo, Dominique Tipper, Cas Anvar, Wes Chatham, and Frankie Adams. The story unfolds 200 years in the future, in a colonized galaxy, when two strangers are caught up in a vast conspiracy. Season three kicks off immediately after the events of the second season finale, with Earth, Mars, and The Belt at war. The quest to discover the secret of the protomolecule intensifies and every decision made risks the survival of the solar system.

The third season of The Expanse averaged a 0.18 rating in the 18-49 demographic and 606,000 viewers. Compared to season two, that’s down by 3% in the demo and up by 8% in viewers. Find out how The Expanse stacks up against the other Syfy TV shows.

Although it premiered with decent numbers for basic cable, it is still too early to use those ratings to predict whether Syfy will cancel or renew The Expanse for season four. Flying blind, I think it will score a renewal, but let’s see what happens as more ratings data rolls in. For now, I’ll keep an eye on the Nielsens and update this page with breaking developments. Subscribe for free cancellation and renewal alerts for The Expanse.

5/26/2018 Status Update: Amazon has picked up the fourth season of The Expanse. Details here.

5/11/2018 Status Update: Despite ratings stability, The Expanse has been cancelled by Syfy, but there’s still hope for season four. Details here.

What do you think? Should Syfy have cancelled or renewed The Expanse for season four? Will you follow this TV series to Amazon?

Having read the book series , this show has done a great job of staying with the books. Even the dialogue is the same. The sets and characters match well and they done a great job of keeping the effects of space real. The characters suck you into the story which has many twists and turns. Thankfully amazon has picked up the series it would be sad to see it die when at the end of season three its really just getting started. I predict this series if completed will revile the beloved star trek series, especially when you can… Read more »

Expanse has been a fantastic show — great story, great graphics, great characterizations. …But crippled by the yearly “will we get renewed?” panic. The finale “turn off all our reactors and now we’re good friends” was deus ex machina totally unsatisfying! Let’s see: Season 1 was about Chairman Mao and his stealth fighters trying to start a war. Season 2 was about moldy monsters running amok then colonizing Venus. COOL (But what happened to the fleet of stealth fighters?) Then Season 3 was about a huge blob of sticky quantum goo that won’t allow the humans kill each other —… Read more »

Ummm, the big moldy colony on Venus flew into space and became the ring near Uranus. I’m not sure how you missed this. (I’m not sure what ultimately happened to the UN crew that went down for a visit. Nothing good, I imagine.)

For those who want action have a brain enjoy a good plot and great acting mixed with sci fi The Expanse is a fantastic show should be renewed. Anyone blasting the show have no common sense or beain for that matter they just want t and a and blood and violence . The Expanse expands your mind giving you the action the plot the intrigue and very good acting. The story is believable if we had the tech the characters portray what any rl person would respond. The show sucks you in. You want intelligence with action a great plot… Read more »

Also, the show is apparently a personal favorite of Jeff Bezos, so it seems as if the show will have a long future!