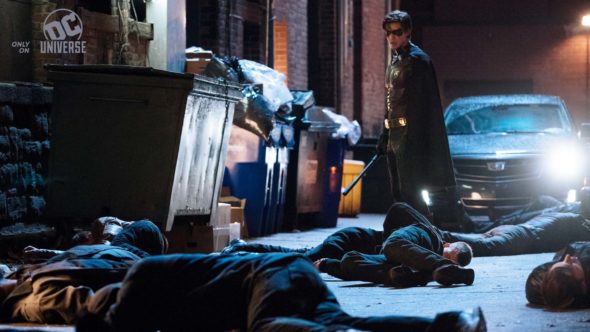 Are the Titans still keeping evil at bay? Has the Titans TV show been cancelled or renewed for a second season on DC Universe? The television vulture is watching all the latest TV cancellation and renewal news, so this page is the place to track the status of Titans season two. Bookmark it, or subscribe for the latest updates. Remember, the television vulture is watching your shows. Are you?

Unless they decide to publicize viewership, it is difficult to predict whether DC Universe will cancel or renew Titans for season two. Fortunately, I do not have to. DC Universe renewed the show for a second season about a week prior to the series premiere. Still, I’ll keep an eye on the trades and update this page with breaking developments. Subscribe for free Titans cancellation and renewal alerts.

What do you think? Are you happy the Titans TV show was renewed for a second season? How would you feel if DC Universe had cancelled this TV series, instead?

The show good. But you can have special guest like Superman or wonder women show an appearance that would make the show even better. And I know it’s called the titans for a reason that’s why I’m saying surprise guest come and pop there heads ever so often. Especially since he is Robin.

This show is not good at all. To much social agenda pushing and not enough story telling. To make it worth while. It may have a good following with the SJWs atm but it’ll crash and burn after season 2 because it’s already been tainted for the real fans. I’ll stick with teen titans go!

I was going to comment but you hit the nail on the head too much political correct, SJW rubish and not enough show, bad script and awful acting suprised it got renewed for a second season.

Probably wont be a popular comment. I personally like the show, nice to have a more adult landscape on a comic based format. I’m taking it with a light look compared to the character more etc….as for Cyborg not being in it? Doesn’t detract for me (after all Victor may not have had his accident yet…who knows?) Dick Grayson transitioning from Robin to become Nightwing is a great arc to follow…..he is pissed at Bats, fighting his own demons, im looking forward to seeing that transition. I hope end of a season we see him Don the blue hawk. Raven… Read more »

Main problem is not that is dark… Is that is stupid and wonky… I didn’t cared when they made flashes sweetheart a black girl in fact i thought it was cool as hell… But Starfire ain’t black she’s not even white…. She is orange not like Trump orange tho… Now an 8 year old playing a 16-18 year old Raven? Plus Starfire is not supposed to be older than 20 and she looks in her 30’s already as does Robin… I didn’t saw much about Beastboy but again way too young for the role… In all fairness i thought when… Read more »