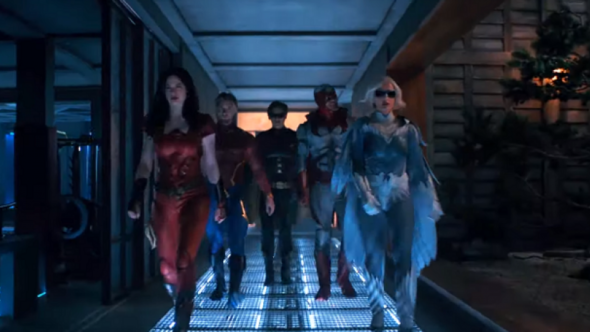 Are the Titans still fighting the good fight? Has the Titans TV show been cancelled or renewed for a third season on DC Universe? The television vulture is watching all the latest TV cancellation and renewal news, so this page is the place to track the status of Titans season three. Bookmark it, or subscribe for the latest updates. Remember, the television vulture is watching your shows. Are you?

Unless they decide to publicize viewership, it is difficult to predict whether DC Universe will cancel or renew Titans for season three. Since this is still a new streaming service, I think it is more likely that the show will be renewed than cancelled. Since that is just speculation, I’ll keep an eye on the trades and update this page with breaking developments. Subscribe for free Titans cancellation and renewal alerts.

11/11/19 update: DC Universe has renewed the Titans series for a third season.

What do you think? Are you glad that the Titans TV show has been renewed for a third season? How would you feel if DC Universe had cancelled this TV series, instead?

Season 1 first few episodes were slow after and toward season finale got a lot of action packed show love cartoon from 2003 on Cartoon Network was okay back then not really intro it since watch this show awesome can’t wait for season 3 and season 4 too thrilled renewed .

I haven’t ever been a huge fan of superhero hero shows aside from batman and of course x men so when my children recently talked me into trying out this series I was hooked from episode 1 and just finished the second season.(binge watching of course). So I definately think there should be a season 3 theres still too much to see and too much of a story to tell I dont want the show to stop like this we need more!!!

I would be great for a 3rd series I love this show . I’m not much of a DC fan but god this is great

Best television show on currently. Great character development. Story line is super. I know many dont like DC movies and that is probably why they dont watch show. Best DC show ever kinda like X men movies. Think people should watch it and judge without bias of the DC movies

Titans should get a third season. I LOVE the live action remake of the original Titans.

Me too but cartoon way different live action was really cable tv now this remake way better compare to our childhood memories love it.

Hoping for a season 3. It’s unfortunate that the show (or app, for that matter) hasn’t gotten much publicity or viewership, but it’ll take some time for DC universe to gain some traction. Once it’s more widely available, I’m confident they’ll do well. I was a fan of the original Teen Titans animation and the comics — I love what they’re doing with the series! It’s much higher quality and more enjoyable than any other Live action comic based series out there. None of that CW drama and nonsense, thank God.