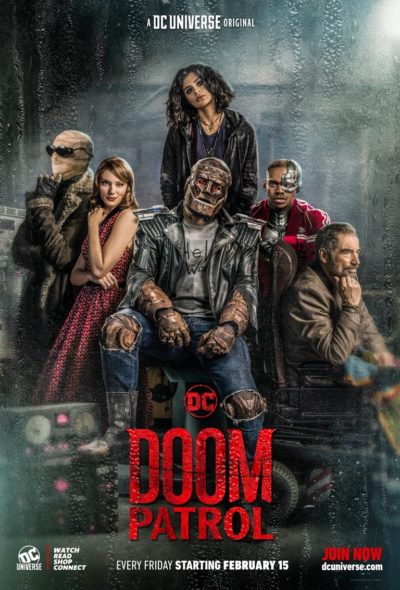 Unless they decide to publicize viewership, it is difficult to predict whether DC Universe will cancel or renewed Doom Patrol for season two. For now, I’ll keep an eye on the trades and update this page with breaking developments. Subscribe for free Doom Patrol cancellation and renewal alerts.

7/20/19 update: The Doom Patrol TV show has been renewed for a second season on DC Universe and HBO Max.

What do you think? Are you glad that the Doom Patrol TV show has been renewed for a second season? How would you feel if DC Universe had cancelled this TV series, instead?

I enjoyed it, mostly, but after the cancellation of “Swamp Thing” by the same network it’s unlikely I will invest anymore of my time in this, or any of their other series.

I did this with Facebook Watch as well, after the cancellation of Limetown. Shame to have to, but what other recourse do we have as viewers?

Expect Doom Patrol the next series to be canceled. Reportedly, the series is costly to produce and AT&T may just canceled the series, being that they have already canceled Swamp Thing. Titans may be the next series canceled, after the series is released. Neither series have been faithful to the comic book origins, so this is no great loss.

I don’t understand what you mean because you use the same term “series” to refer to both a string of episodes (season), as well as the entire show’s run (series)

Greatest show to come out in i can’t even tell you how long. Severely underrated considering how many people ive talked to who havent seen any episodes. Literally everyone i talk to says they haven’t even heard of it… DC just needs to promote this show more. Its so amazing and so well written. I really am praying for a season 2… But all the greatest shows get canceled:/ ill be really sad and traumatized. Really wanted to see Candlemaker get on as a villain in the show, i think thatd bring some genuine horrific moments to this comedy/action/suspense/drama. Truly… Read more »

This show might be one of the best new shows on TV. Hearkens back to a Buffy the Vampire Slayer style combination of weird, funny, personal, adult & action packed. People should be watching.