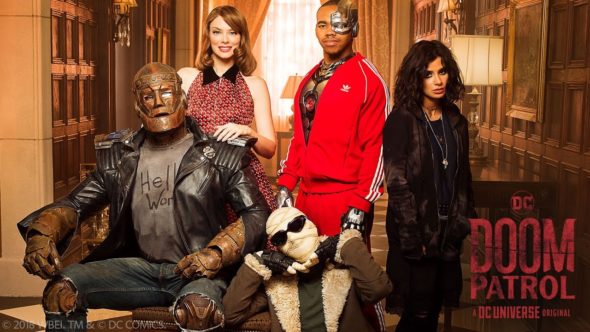 This superhero team isn’t doomed. The Doom Patrol TV show has been renewed for a second season via a deal with DC Universe and the forthcoming HBO Max streaming service. Season two will debut sometime in 2020 on both platforms. In addition, when HBO Max launches in Spring 2020, the 15 episodes of season one will be available on the service.

A sci-fi action-adventure based on the DC Comics characters, Doom Patrol stars Brendan Fraser, Matt Bomer, April Bowlby, Diane Guerrero, Joivan Wade, Timothy Dalton, and Alan Tudyk. The superhero drama centers on Robotman aka Cliff Steele (Fraser), Negative Man aka Larry Trainor (Bomer), Elasti-Woman aka Rita Farr (Bowlby) and Crazy Jane (Guerrero), who all gained new abilities in disfiguring accidents. This ragtag team of outcasts came together under the leadership of mad scientist Niles Caulder aka the Chief (Dalton). After he disappears, Cyborg (Wade) summons them into action for a new mission.

What do you think? Did you watch the first season of the Doom Patrol TV show on DC Universe? Will you check out season two?

I would like to see what they do for the second season either end it or get a third season but don’t just give us a cliff hanger and then cancel the show it gets annoying getting into a show just to be screwed on the ending cause you guys don’t make money if it keeps going like that I will stop watching your shows or movies anymore. Movies are like going gambling you can’t stop the bet after you lost your turn, same should it be for movies or TV shows, you have to make a gamble not just… Read more »

Please take some of the mystery out of season 2 because whilst enjoyable, it did start to over complicate itself, which leads to too much wondering and not enough enjoying.

Happiest news I have received all month. Since Swamp Thing was cancelled before the first episode aired I was convinced the DC Online originals were all going to be cancelled!

I loooooved this show!!! Im so so happy about this

Hoping the second season is as great as the first season was.