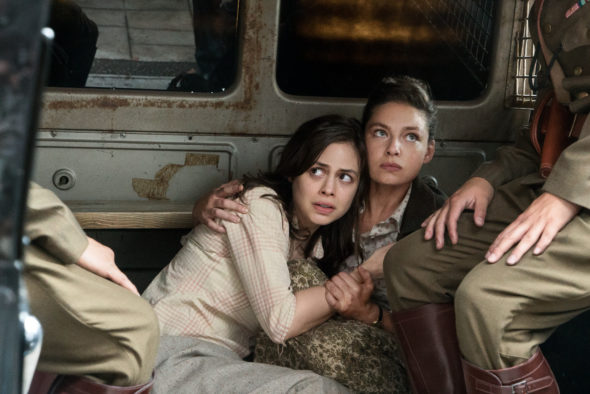 What will become of Juliana Crain? Has The Man in the High Castle TV show been cancelled or renewed for a fourth season on Amazon? The television vulture is watching all the latest TV cancellation and renewal news, so this page is the place to track the status of The Man in the High Castle season four. Bookmark it, or subscribe for the latest updates. Remember, the television vulture is watching your shows. Are you?

Unless they decide to publicize viewership, it is usually difficult to predict whether Amazon will cancel or renew TV shows, but in the case of The Man in the High Castle, they renewed it for season four, prior to the third season premiere. The advance renewal seems a little unusual. No one has said it is for a final season, but no one has  said it is not. Just in case, I’ll keep an eye on the trades and update this page with breaking developments. Subscribe for free Man in the High Castle cancellation and renewal alerts.

What do you think? Do you hope The Man in the High Castle TV show will be renewed beyond the fourth season? How would you feel if Amazon cancelled this TV series, instead?

This is a very intense show. I bingwatched it and now can’t wait for Season 4.

Riveting! Could not stop watching. Cannot wait for season 4!