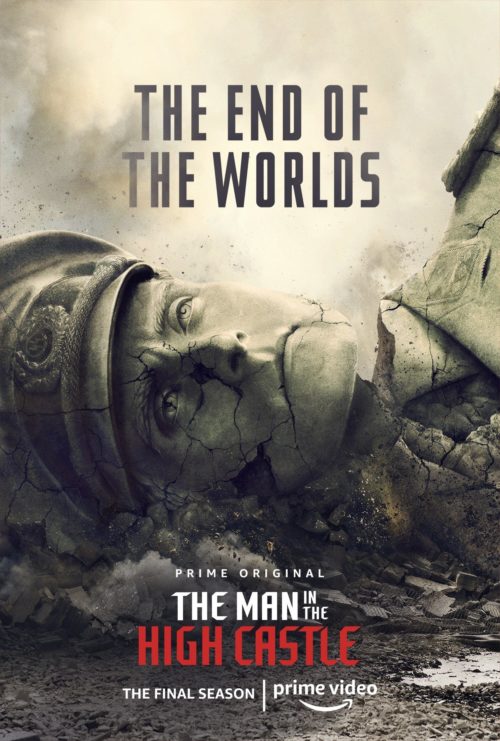 “The end of the worlds” is coming. Amazon has announced that season four of The Man in the High Castle will be the alt-history series’ final season. The streaming service hasn’t revealed a specific release date (production on season four is still underway) but we do know episodes will be released this fall.

Here’s the press release from Amazon, as well as a teaser video:

SANTA MONICA, Calif. – February 19, 2019 – Amazon Prime Video today announced that the fourth and final season of the Emmy Award-winning series The Man in the High Castle will premiere this fall. The final season is currently being filmed in Vancouver and will wrap next month.

“It has been a great privilege to work alongside our extraordinary High Castle team, in partnership with David Zucker and Scott Free, to bring my father’s classic novel to life, particularly during this tumultuous period in our real world. I believe fans will be thrilled and satisfied by the epic conclusion we have in store for them,” said Isa Dick Hackett, executive producer, The Man in the High Castle. “I am very grateful for the ongoing support from Amazon as we produce this final season, and look forward to building on this extremely successful partnership. Stay tuned; there’s more to come!”

“The undertaking of High Castle has been simply extraordinary from the start: the seven years it took to land an ideal home at Amazon – the behind-the-scenes artistry which has been as awe-inspiring to experience as hopefully the work on-screen so powerfully delivered – and an audience whose high standard to meet was our unyielding goal,” said executive producer David Zucker. “It’s all gratitude to the talent, who persevered and so masterfully excelled, to Amazon for their deep support, and to Isa and her team, for the trust and valued partnership in which we’ve thrived every step of the way.”

“We are incredibly proud of all of the hard work from the massively talented executive producers, cast, crew, and everyone who has worked on The Man in the High Castle over the years,” said Jennifer Salke, Head of Amazon Studios. “With production ongoing on our fourth and final season, we can’t wait for fans to see how this final chapter in the story unfolds. The Man in the High Castle helped define Amazon Prime Video in the genre space, and we are grateful and excited that we’ll continue to be in business with Isa and Electric Shepherd Productions for future Philip K. Dick adaptations.”

Based on Philip K. Dick’s award-winning 1962 alternate history novel, The Man in the High Castle explores what would have happened if the Allied Powers had lost World War II. The final season of The Man in the High Castle will be rocked by war and revolution. The Resistance becomes a full-blown rebellion, driven by Juliana Crain’s (Alexa Davalos) visions of a better world. A new Black insurgent movement emerges to fight the forces of Nazism and imperialism. As empires teeter, Chief Inspector Takeshi Kido (Joel De La Fuente) will find himself torn between his duty to his country and the bonds of family. Meanwhile, Reichsmarschall John Smith (Rufus Sewell) will be drawn towards the portal the Nazis have built to another universe, and the tantalizing possibility of stepping through a gateway to the path not taken.

The Man in the High Castle made history when it debuted on Prime Video in 2015 and became the most-viewed original series on the service. Since its debut, the series has received critical acclaim and has received and been nominated for numerous awards, winning two Emmy Awards and most recently being nominated for the ADG Awards, the ASC Awards, the CDG Awards, VES Awards and the MPSE Golden Reel Awards. Amazon Studios also recently announced its first look deal with The Man in the High Castle executive producer Isa Dick Hackett and Electric Shepherd Productions to continue to develop and produce new Prime Original series which will premiere exclusively on Prime Video in more than 200 countries and territories worldwide.

About Prime Video
Prime Video is a premium streaming service that offers customers a vast collection of digital videos – all with the ease of finding what they love to watch in one place.

· Included with Prime: Watch thousands of popular movies and TV shows, including our award-winning Prime Originals such as Emmy-winning The Marvelous Mrs. Maisel, Tom Clancy’s Jack Ryan, Homecoming, The Man in the High Castle, Bosch, Academy Award-winning Manchester by the Sea and The Salesman, Academy Award-nominated The Big Sick and the critically acclaimed Beautiful Boy, exclusives, live sports and licensed and self-published content available in more than 200 countries and territories worldwide.

· Watch more with Prime Video Channels: Prime members can add 150+ channels like HBO, Cinemax, STARZ, SHOWTIME, CBS All Access, and more – no extra apps to download, and no cable required. Only pay for the ones you want, and cancel anytime. View the full list of channels available at amazon.com/channels.

· Rent or Buy: Enjoy hundreds of thousands of titles, including new-release movies and entire seasons of current TV episodes, available for all Amazon customers to rent or buy.

· Instant access: Watch where and when you want with the Prime Video app on your smart TV, mobile device, Fire TV, Fire tablet, Apple TV, game consoles or from the web. For a complete list of compatible devices, visit amazon.com/howtostream.

In addition to access to movies and TV shows included with Prime, the Prime membership includes unlimited fast free shipping options across all categories available on Amazon, more than two million songs and thousands of playlists and stations with Prime Music, secure photo storage with Prime Photos, unlimited reading with Prime Reading, unlimited access to a digital audiobook catalogue with Audible Channels for Prime, a rotating selection of free digital games and in-game loot with Twitch Prime, early access to select Lightning Deals, exclusive access and discounts to select items, and more. To sign-up for Prime or to find out more visit: amazon.com/prime.

What do you think? Do you like the The Man in the High Castle TV show? Are you sorry that there won’t be a fifth season? Will you be watching this fall?

Think everyone missed the most poignant aspect of last episode when BCR exclaimed, “all white people are Nazis!!?”, right after the BCR disregards American Flag/capitalist society as nothing they want?! So, the ending represents a world dominated with 3 totalitarian movements: militarized Japan, fascism and Communisim as the worlds choices? Good Grief. Seems all those people pouring in , are coming to the wrong world.

Sad to see it ending. Why are they canceling all the good shows? Makes me not want to start watching because I might like it only to see it cancelled.