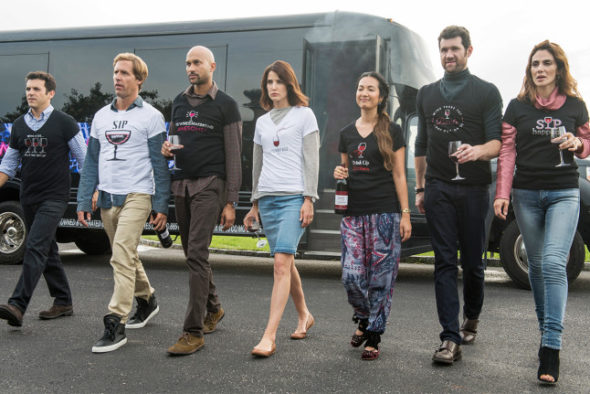 It looks like Netflix is done being friendly. According to The Hollywood Reporter, the streaming service has cancelled Friends from College after two seasons.

Netflix did not give an explanation for cancelling Friends from College, but you can read their statement below:

Friends From College will not return for a third season. We’re grateful to creators Nick Stoller and Francesca Delbanco for creating a wise, funny and supremely relatable show. We also want to thank the hard-working crew, and we raise a glass to the amazingly talented cast including Keegan-Michael Key, Fred Savage, Cobie Smulders, Nat Faxon, Annie Parisse, Jae Suh Park and Billy Eichner.”

What do you think? Have you seen Friends from College? Would you have watched a third season?

This series was so well written with an extremely talented cast. I was completely “all in” and sad there will not be a third season.

I am extremely disappointed and angry to find out Friends from College has been cancelled after only 2 seasons. This is the second show within a couple of months that I have found, loved, and later found out has been cancelled (the first show was Gypsy). I agree that Netflix should try to reach out to viewers to find out if a show is watched, and how well it is liked before just pulling the rug out and cancelling it.

Dear Netflix, before cancelling a show try reaching out to your subscribers to gauge how a show is doing first. Second, decide whether or not your paying customers would like to continue a show based on that data/reviews. Lastly, if in the end, you still decide to cancel a show…replace it with something far more better than the cancelled show. It’s Not Hard!!!

I just binged watch and was looking to see when season 3 would be on and this is very upsetting. Love the show loved the cast. Loved both seasons , and was really looking forward to see what ends up happening. Ugh!!

We need a 3rd season. It left on a cliffhanger. Without resolving anything… I’m upset

I am so sorry this show has been cancelled. I just bing watched the first two seasons Nd was looking to see when Season 3 would be out. Netflix you have got to stop cancelling shows without resolving everything. I am beginning to not be a fan of yours!!!

Yes, I got a kick out of the show and would have enjoyed a 3rd season to see which couples got back together, etc. Each season was only 10 short episodes anyway. I enjoyed it. It resonated with me for some reason.

Seriously? How could such an outstanding series be cancelled?!

Great premise, characters and actors. Smart, hip humor. Yes we’d watch another season or more. Fave of both of us.

Damn, another one of my favs not returning for another season.

I actually liked this show and season 2 was a big improvement from season 1. Was looking forward to a third season, but didn’t feel that same way after season 1. It was basically just getting started.

Thank god. What a steaming, stinking **** that show was. A waste of Keegan-Michael Key for sure.

You aren’t going to like every show that Netflix puts out.. You could have just watched someone else if you thought so negatively of it “Mike Hunt”.