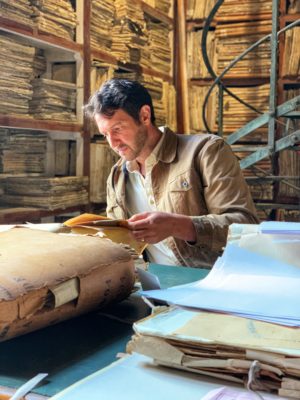 Travel Channel is on a mission. Recently, the network announced the premiere date for their new TV show, Mission Declassified.

The docuseries follows investigative reporter Christof Putzel as he travels the world to and “discovers new, or simply missed, clues and connections that could finally unlock decades-long mysteries surrounding legendary cold cases.”

PASADENA, CALIF. (February 12, 2019) – For almost 20 years, award-winning investigative reporter Christof Putzel has traveled the world uncovering some of the most hard-hitting stories of our time. He has exposed neo-Nazi attacks against immigrants in Russia, illegal American weapons sales to Mexican drug cartels, the tobacco industry’s exploitation of children in Asia and children used to mine gold in deadly labor camps in the Congo. He has used declassified government documents and key sources to bring these shocking stories to light. Now, in “Mission Declassified,” premiering on Sunday, March 24 at 10:00 p.m. ET/PT on Travel Channel, Putzel uses the same tools to explore history’s most legendary and notorious mysteries. By decoding recently declassified documents, Putzel discovers new, or simply missed, clues and connections that could finally unlock decades-long mysteries surrounding legendary cold cases.

“I’m thrilled to have the opportunity in this series to show our audience how investigations work and why so many of history’s biggest headlines remain a mystery,” said Putzel. “While it can be a frustrating, sometimes daunting, adventure with no guarantee of success, it can also unveil new knowledge and that will bring us closer to the truth.”

“For a seasoned investigator, new information is the lifeblood of any quest,” said Jane Latman, general manager, Travel Channel. “We’re excited to go on this fascinating journey with Christof every week, and we know whatever he uncovers will help separate fact from fiction.”

In each of the nine one-hour episodes, Putzel reveals new information from an unsolved case that takes him on a surprising and circuitous adventure into the past. Upcoming episodes include:

The premiere episode begins in San Francisco, where in 1962, three prisoners escaped from Alcatraz. Officially, they died in the surrounding waters. But FBI files say otherwise. Christof Putzel braves those same waters, hunts down inside information and goes on a manhunt across two continents to track down the whereabouts of the missing men.

Christof Putzel jumps from a plane and digs up rare FBI files in pursuit of shocking new leads that take him from the Pacific Northwest to Las Vegas and Utah in his quest to find the real identity of hijacker DB Cooper.

Christof Putzel investigates “The Crime of the Century,” the kidnapping and killing of aviator Charles Lindbergh’s baby in 1932. Putzel’s grandfather broke that story and followed it until the execution of the convicted kidnapper, Bruno Richard Hauptmann. Now, using his grandfather’s notes and declassified FBI files, he tracks surprising new leads to Germany and the Nazi Party.

What do you think? Are you a fan of travel docuseries? Will you watch Mission Declassified?

Please, please continue to have this show go on. It’s mesmerizing. We love mysteries like this.

I love this show and I hope it continues.

We are already having withdrawals – please continue this series. Great host, great show. Thanks

I think it’s a GREAT show!!! I wonder if ” The Axman”also did Villasca axe murders? Please don’t cancel this show!!!!! Really makes you think.

It’s just as bad as Expedition Unknown or Auto Biography on Motor Trends. You would think it was the same people that produced the shows. Everything about these kind of shows get NO WHERE they lead you on and on. The people may be real but it’s just a way for the people that volunteer on the show is to say guess what kids Daddy gets to be on TV. It’s just typical Recycled BS and it takes the Discovery away from Discovery. We aren’t Discovering anything except for more Recycled Material from these shows that were filmed and Recorded… Read more »

I have watched MANY special and books on all the subjects brought forth on this series and EVERY episode found something I have never heard or read before. Christof Putzel not only comes from a family of very respected journalists, but is one himself. Sorry someone peed in your cornflakes, but don’t take it out on an amazing show. last time I checked you don’t have your own show or any awards for being a journalist . . .

Great show. We are glued to this show every week. Keep it coming!

Christoff is a plagiarist who watches other people work.. uses knowledge and research others have already done and distributed ,, then adds a small amount of material so he can stamp it “his work” Morris and the Anglins didnt have a BOAT to cross to Angel island like portrayed by Christoff,, they had water wings which only supported their chest,, a vast difference between high and dry and swimming in 46 degree water. He adds little to the knowledge base of history, he is a regurgitation journalist if journalist is applicable. Travel Channel could use air time better without “award… Read more »

Re: The Lindbergh Baby Kidnapping
Several years ago, a story was published that Charles Lindbergh had fathered children with a German woman while he was still married. I’ve wondered if the possibility has ever been looked into that his child’s kidnapping was an act of revenge by, maybe, the man whose wife or woman Lindbergh had children with. If I remember correctly, the kidnappers were German.