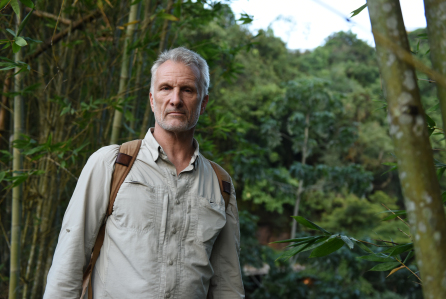 The docuseries follows forensic geologist Scott Wolter as he dives “into our distant past looking for hidden truths that some people have gone to great lengths to cover up. And now it is time to solve some of America’s real cold cases, once and for all.”

Travel Channel has ordered 10 new episodes of America Unearthed, which will premiere this summer. You can read more info below:

PASADENA, CALIF. (February 12, 2019) – America is a burial ground for secrets of our past. Artifacts and strange finds offer opportunities to discover a history of our country that we don’t know. Forensic geologist Scott Wolter believes that some of the history we’ve been taught is wrong and he is on a mission to prove it. Now, Travel Channel is breathing new life into “America Unearthed,” updating the format for its new network home and allowing Wolter to continue his quest to establish what really happened and set the historic record straight.

Wolter has made his life’s work out of diving into our distant past looking for hidden truths that some people have gone to great lengths to cover up. And now it is time to solve some of America’s real cold cases, once and for all. Travel Channel has acquired the previous three seasons comprising 39 episodes and the network will premiere a fourth season with 10 new one-hour episodes this summer.

“Travel Channel is the perfect new home for this show,” said Wolter. “The series has always been known for great storytelling, cutting-edge science and beautiful cinematography, but now my adventures are going to be epic.”

“With a serious built-in fanbase, Scott is ready to get to the bottom of a whole new batch of mysteries and build on the success of the earlier seasons,” said Jane Latman, general manager, Travel Channel. “Adding ‘America Unearthed’ to the Travel Channel slate is sure to be a crowd-pleaser and ratings driver.”

What do you think? Have you seen America Unearthed? Will you watch the revival?

With this now being 2022, I’m hoping the renewal is still with us.

Love the show. Only found out it was back in Aug. Can’t wait for next season. Thanks for bringing it back.