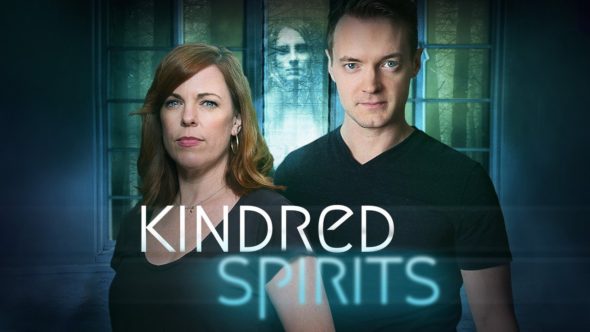 Travel Channel is back to exploring the unknown. This week, the network announced season three of Kindred Spirits will premiere in January.

NEW YORK (December 18, 2018) – Powerhouse paranormal investigators, Amy Bruni and Adam Berry, know that those who have passed might return, and that is when the true danger begins. In “Kindred Spirits,” premiering its third season on Travel Channel on Thursday, January 24 at 10 p.m. ET/PT, Bruni and Berry enter America’s darkest locations demanding answers to the most chilling, haunted mysteries. Discovering and confronting paranormal activity is just the first step. In each one-hour episode, their ultimate goal is to determine who or what haunts the space and whether it’s safe for the living to remain. Their multi-layered investigations dig into the past in order to identify the dead and analyze the threat. With an arsenal of paranormal tools and their hands-on investigation style, the duo brings peace to those tormented by restless spirits by giving a voice to the dead.

Throughout the 10-episode run, Bruni and Berry’s mission to uncover the truth behind America’s most intense paranormal activity takes them to evil and historic locations, including properties that were used as orphanages and asylums, as well as personal homes inhabited by aggressive entities. Special guests also assist the paranormal duo including psychic medium Chip Coffey and paranormal researcher John Tenney.

“With its broader locations and terrifying tales, the new season of ‘Kindred Spirits’ is right at home on Travel Channel,” said Jane Latman, general manager of Travel Channel. “Amy and Adam have built a strong trust with their fans who can’t get enough of their unique perspective of helping the haunted by reconstructing the faded stories of the dead — their investigations bring peace to the living and give a voice to the afterlife.”

What do you think? Have you seen Kindred Spirits? Will you watch the new season?

I TrueType enjoy the show. When will it air again

Kindred sprit is the best and I watch them all

This show is the best! And I watch them all!

YES! Love this show! So credible!

I could watch Kindred Spirits every day of my life. They are more down to earth and tell people really what is happening! They have the same initials as each other AB AB.
Please keep the two wonderful people on for at least another 5 seasons if possible and they want to work that much! I LOVE THEM BOTH SO MUCH! Keep the shows/programs coming!
Thank you for being one of the best Spirit type shows on TV.

Love the way these two approach the spirits with respect and interest for their well being. They don’t just try to “find” spirits, they try to understand why they are still here and help them move on. So refreshing, from the other shows that only want to glamorize the poor souls. Love the way they work together to come to the conclusion. Keep these guys!!!

I total love this show, they conduct their investigations differently then those boneheaded that think they know how to talk to spirits. Amy and Adam are real investigators in the spirit world, they do fake it… please continue to bring this show to us.

As a professional psychic medium, I love this show for its authentic heart for the deceased. We should not be afraid, we should always seek to bring healing. Amy and Adam are so wonderful!

My friend Betsy and I love the show. We hope to see more of Chip. We love him and we wish he would have his own show again.

I loved watching Amy and Adam on Ghost Hunters and have continued to watch them as they have progressed to Kindred Spirits. I love the respect that they show the spirit world and that they remove the fear factor for their clients. I am very much looking forward to Season 3.

Love the show Kindred Spirits as I did with Ghost Hunters. I look forward to watching you and your show.

So glad kindred spirits is back . Never miss a show am ready for January 24

I hope they haven’t change Kindred Spirits to be like the rest of them. All the other shows make out the supernatural happenings to be evil. Amy and Adam are very considerate to the spirits that seem to haunt the homes. In most cases, the spirits are people that have lived there or relatives of the people that are living there now. That is what makes this show the best and most believable compared to all the others.

Happy they are back. They’re my favorite out of all the paranormal shows.

Of all the paranormal shows, this one features a pair of leading characters who seem both normal and genuine. Glad to see they get another season to entertain us. Adam and Ami are very likable people and, compared to others in the genre, seemingly on the up and up. Good decision, Travel Channel.