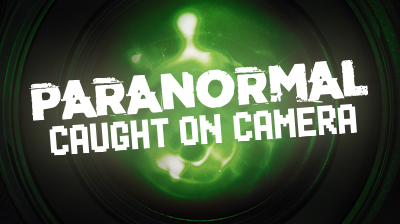 The series “showcases the most amazing, eye-opening and downright scary paranormal videos from around the world, as a panel of experts and specialists breaks down the footage and analyzes what exactly the eyewitnesses captured.”

Travel Channel has ordered 26 episodes for season two of Paranormal Caught on Camera. The season one finale debuts on June 9th at 8 p.m. ET/PT.

NEW YORK (June 4, 2019) – After a record-breaking first season, Travel Channel has greenlit 26 new episodes of the hit series, “Paranormal Caught on Camera.” The show, which launched on Wednesday, February 13, posted a 50% increase year-over-year for its time slot and ranks in the top 3 of all Travel Channel original series. Over 13.2 million total viewers have tuned into the first season to date. New episodes will air early next year.

“‘Paranormal Caught on Camera’ gets right to the good stuff and delivers strange and unexplained phenomena that our audience can’t get enough of seeing,” said Matthew Butler, general manager, Travel Channel. “These are head-scratching videos that are so crazy and unbelievable that you want to see them over and over again… and may convert even the biggest skeptics out there. Plus, it’s just plain fun to watch!”

Each hour-long episode of “Paranormal Caught on Camera” showcases the most amazing, eye-opening and downright scary paranormal videos from around the world, as a panel of experts and specialists breaks down the footage and analyzes what exactly the eyewitnesses captured. The season finale will air on a special day on Sunday, June 9 at 8 p.m. ET/PT.

What do you think? Have you seen Paranormal Caught on Camera? Are you glad it’s been renewed?

Oh a lot of it is fake like in Georgia cemetary they supposedly capture ghost behind tree. It is clearly a person in night gown why would ghost run when they see it. Not buying that one but show is fun find stuff that is not already on strange evidence.

Yes glad it’s renewed but I suggest cast should think of possibly that ufos are holograms our tech to suck us in to world having to come together to fight fake aliens and usher in New World Order. Case face it if real aliens wanted our planet not much we could do.
Regards Kevin Oddy

LITERALLY THE ONLY REASON I PURCHASED THIS OFF AMAZON WAS BECAUSE IT SAID BRUCE CAMPBELL SHOW CASES THE PARANORMAL CAUGHT ON CAMERA. This is BS, I want my money back. The show sucks, but if Bruce was the host, he can make poop smell like roses. I’m so upset, no bruce = waste of money.

This show seems so fake..also you keep showing the same things,bring back more believable ghost shows

The episode “unidentifiable floating object”, could that be the spiders that make a parachute web and as they float they join one another to form one big floating web?

I had an experience a few years ago and have pictures of it. I would like to show the pictures to someone to see what they think. We had a big snow and there was a definite symbol outlined on both our vehicles. We live in the country and nothing could have made an exactly perfect shape like that, it covered my entire hood. I would like to know if the symbol has a meaning.

Season 2:Episode 4 – surveillance camera image of creature running down the guy’s driveway is a black and white dog! My 10 year old daughter saw it immediately, but the show is still good fun.

Did anyone notice on paranormal caught on camera, season 2 episode 9, the first story about The Wailing woman, as soon as they lit the white dress on fire an orb flew up? If you go frame by frame, you will actually see a face in there.

Who narrates the show? It’s driving me nuts! It sounds like John Zaffis. Please let me know. Love the show.