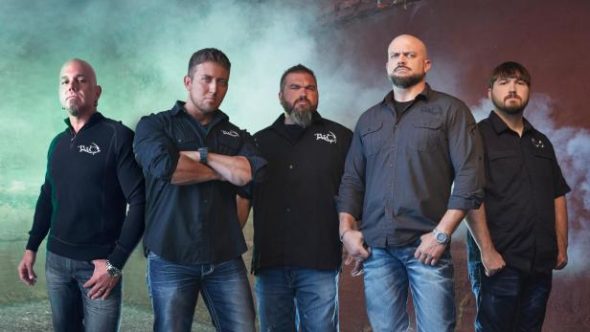 The interactive series “invites ghost lovers to join the live paranormal investigation alongside the Tennessee Wraith Chasers, a team of paranormal experts that relies on a combination of scientific method and spiritual faith to navigate its investigations.”

NEW YORK (August 16, 2018) – Calling all ghost hunters! Get ready for a thrilling, suspenseful and interactive paranormal investigation series where viewers can help drive the course of the live show in real time. Travel Channel’s “Haunted Live” premieres on Friday, September 14 at 10 p.m. ET/PT, and invites ghost lovers to join a live paranormal investigation alongside the Tennessee Wraith Chasers, a team of paranormal experts that relies on a combination of scientific method and spiritual faith to navigate its investigations.

Each week, the team – comprised of Chris Smith, Steven “Doogie” McDougal, Scott Porter, Brannon Smith and Mike Goncalves – will reveal a new haunted location to the public, keeping it under wraps until the investigation begins to avoid interference or contamination. Then, team members utilize their skills, technology and unique experiments to capture evidence of paranormal activity in a live and unfiltered paranormal investigation. Through an on-location live video stream, viewers can monitor all of the “Haunted Live” activity on Travel Channel’s Facebook Live platform and comment on any findings in real time, directing the team where to investigate next. Fans can follow Travel Channel’s social media pages for the location reveal each week, and visit Facebook to join a special pre-hunt Q&A with the Tennessee Wraith Chasers. Visit TravelChannel.com and #HauntedLive for additional content and exclusive updates.

“This is going to be the ultimate paranormal experience,” said Chris Smith, founder, Tennessee Wraith Chasers. “It’s like nothing that’s ever been done before in this field and on this level. We have such a loyal and passionate fan base. With their eyes and ears added to each investigation, there’s no telling what we could uncover. Board the Wraith Train, strap in tight and enjoy the ride.”

“We try to dig deep into the paranormal, seeking out the unknown mysteries to the other side,” added Steven “Doogie” McDougal, co-founder, Tennessee Wraith Chasers. “This show takes our skills to the next level as all of Wraith Nation will be on the hunt alongside the TWC. All those extra eyes peering into the paranormal realm, I think we’ll have the upper hand and those spirits will have no place to hide.”

What do you think? Are you a fan of paranormal series? Will you watch Haunted Live?

I am watching it to the end, but will not be watching again. They try to ask questions, don’t leave enough time for answer, it sounds hollow, they interpret sounds as words. I want to hear everything, but want to understand what’s being said. Watching the Tennessee Wraith episode. This is at the bottom of the list. One guy sniffles all the time. I can’t watch thus show again. There are others that are so much better. If they ask one question, wait for an answer instead of talking continuously. One person at a time. Thank goodness its over.

I agree that they have sold their soul to the devil. I was a staunch viewer of all of the episodes but I was fully blown away when I tried to watch the episodes. I really felt bad for the boys as they are trying to find some shred of a ghost, ghoul, or even a orb. I still have not figured out why they needed a Host outside showing us an orb flying past the screen as if it was the catch of the night. He seems to take up more show time then the five ghost hunters get.… Read more »